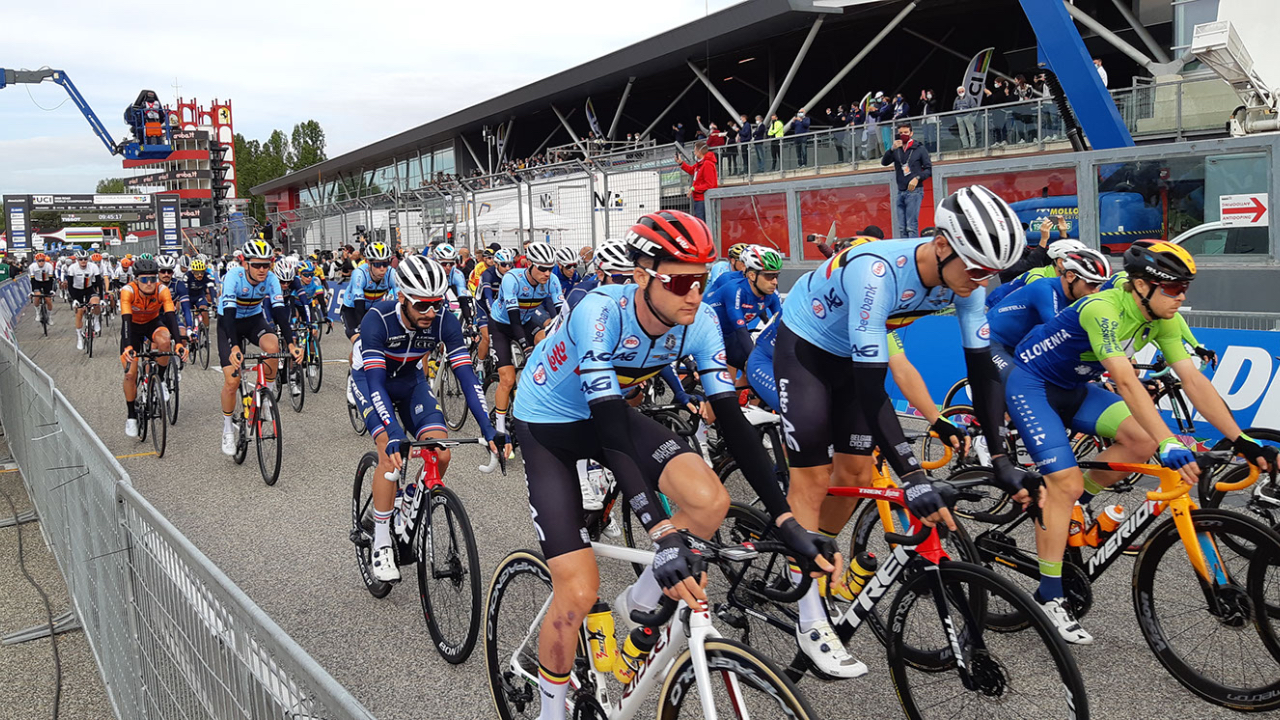 The number of live hours viewed in key markets* for the four elite races was up 22% on last year (from 39.6 million in 2019 to 48.4 million this year). In France, Italy, Poland and Slovenia, hours viewed almost doubled and, in Switzerland, they nearly tripled.

The 2020 UCI Road World Championships were one of the most challenging of all-time – both for the riders, national teams and organizers who were faced with a last-minute change in venue. Coronavirus restrictions in Switzerland meant the race was re-located to Imola in Italy with only a month to set up.

Both the Women’s Elite Road Race (26 September) and the Men’s Elite Road Race (27 September) were the most successful of the last four years (up 75% and 54% respectively on 2017 figures in terms of hours viewed). The Women’s Race attracted a 50% market share of television viewers in Flemish-speaking Belgium and over 14% in the rest of Belgium, Denmark, Slovenia, the Netherlands and Switzerland. The Men’s Race had a huge 67% share of the television audience in Flemish-speaking Belgium with peak audiences of over 1.3 million across the country and in the Netherlands.

Eurovision Services acted as host broadcaster and distribution partner for the event, providing coverage from 18 cameras, using three relay aeroplanes, two helicopters, four motorcycles and an RF camera to cover the challenging course. Innovations such as the use of slow-motion cameras capturing 2,500 frames per second provided for some spectacular shots of the riders’ emotions as they reached the finish line. Bringing his considerable skills to bear in the production process was Jean-Maurice Ooghe, the former Tour de France production director, a position he held with distinction for over 20 years through to 2019.

UCI President David Lappartient said: “These excellent figures come as reward for all the hard work undertaken with the Organising Committee and the EBU in delivering very high quality production that showed the races, riders, sponsors, the region of Emilia-Romagna and the town of Imola at their very best.

“Despite a very short preparation time, the UCI was able to rely on the professionalism and determination of all its partners and thanks them for that.

“The 2020 UCI Road World Championships in Imola, Emilia-Romagna provided the perfect showcase for cycling both in Europe and around the world and allowed us to attract new audiences.

“These figures are the latest in a series of excellent ratings for all the events on the 2020 UCI International Calendar held to date, among them the Tour de France and several major Classics, reflecting the public’s growing interest in our sport.”

Frédéric Sanz, Head of Cycling, Eurovision Sport said: “We would like to congratulate the UCI and the Organizing Committee of the 2020 Road World Championships in Imola for organizing such a fantastic event in the space of just a few weeks.

“Both Eurovision Sport and Eurovision Services are thrilled and proud to have contributed to the success of this event with our innovative production and extensive distribution of the footage throughout Europe.

“Thanks to the unrivalled combination of EBU Members’ national coverage in 18 key cycling countries together with the wide pan-European coverage provided by Eurosport, the competition has generated record ratings that will hopefully benefit all stakeholders including, of course, the UCI, the Organizing Committee and the Emilia-Romagna region, the riders and the national teams, the sponsors and the local and regional authorities. This is a win-win situation and we are very proud to have been a part of it.”

Marco Tinnirello, CEO, Eurovision Services, said: “Setting up a host broadcasting operation from scratch just one month before the event was an immense challenge. But thanks to their experience and excellent contacts, our team were unfazed by this. I was particularly pleased to see their hard work rewarded by the many compliments on social media specifically about the production.”

Eurovision Sport brings unrivalled cycling coverage to audiences across Europe free-to-air thanks to its long-standing rights agreements notably with the Union Cycliste Internationale (UCI) for its various World Championships; with A.S.O. for the Tour de France and several top class races including Paris Roubaix, Liège Bastogne Liège, Paris-Nice and the Criteirum du Dauphiné; and with Unipublic for the Vuelta a España.