A beacon of trusted news content in a turbulent media space 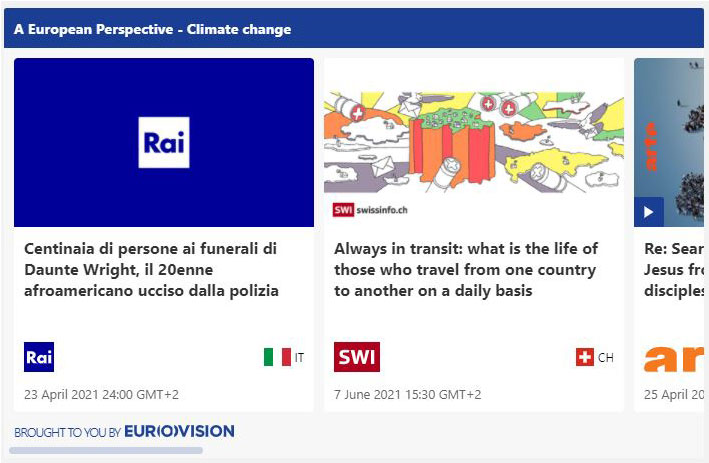 Introducing “A European Perspective”, an EBU-led initiative aimed at building a trusted news public sphere based on shared values.

“A European Perspective” is a news recommendation service that provides audiences from across Europe with fresh insight into issues of common concern and mutual interest.

It helps European citizens to contextualise trending stories such as the COVID-19 pandemic, climate change and migration and to better understand of how neighbouring countries are coping with these challenges.

HOW DOES IT WORK?

Each participating organization shares its stories through a Digital News Hub where they are translated with EBU's EuroVOX into multiple languages using cutting-edge Artificial Intelligence (AI) technology and robust editorial workflows.

Each participant is then able to select the stories that are most relevant to their audiences and publish them through a dedicated widget featured on their websites and apps.

WHY IS IT IMPORTANT?

The tool empowers broadcasters to transcend language barriers and bring trusted content to citizens of all ages across Europe.

As a result, “A European Perspective” contributes to the development of a European public sphere that is rooted in core EU values such as respect for human dignity, equality, inclusion and the rule of law. It also aims to celebrate diversity and promote understanding between peoples across the continent.

HOW DOES IT HELP TO COUNTERBALANCE DISINFORMATION ACTORS?

This initiative has the unique potential to act as a beacon for audiences seeking to navigate their way through an increasingly oversaturated and disordered media space. It acts as a powerful counterbalance to disinformation campaigns and agenda-driven narratives which seek to foment division and exploit fault-lines between communities.

WHO IS BEHIND IT?

“A European Perspective” is co-funded by a grant from the European Commission's Multimedia Actions programme. However, content production overheads are borne entirely by the participating broadcasters which retain full editorial control over their stories.

The project is being led by the European Broadcasting Union (EBU), the world’s largest alliance of public service media. The EBU is uniquely positioned to coordinate the efforts of its Members, tap into a rich pool of expertise and resources, and revolutionise content sharing in the European media space.

“A European Perspective” takes its cue from the Eurovision News Monitoring Tool which was piloted by 14 EBU Members in 2020. The aim of this tool is to allow participating broadcasters to monitor online content produced by their counterparts in real-time, using AI-assisted translation, automatic content recommendation using PEACH, and filters to identify items of interest that will resonate with national audiences.

In the framework of the EU-funded project, “A European Perspective” is complemented by a second Europe-wide content offer, “The European Collection”, which is managed by ARTE. “The European Collection” is a curated selection of documentaries, magazine shows and reports focusing on European politics and society. It comprises programmes produced by France Télévisions, Switzerland's SRG SSR, and the German public broadcasters ARD and ZDF.

HOW IS ARTIFICIAL INTELLIGENCE USED?

The use of AI is purpose-driven, aiming to increase the relevance and diversity of news content and audiences by means of automated translations, text transcriptions and story selection.

The application of AI will be in accordance with the distinct requirements of the public service remit in reaching its audience and best ethical practice. Public service media are committed to using AI in a way that respects fundamental rights, especially freedom of expression and information, and that enhances cultural and social diversity.