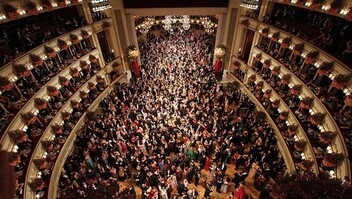 The Vienna State Opera kindly invites EBU Members to the first Broadcasters’ Day in Vienna on Thursday, 27 March 2014. In the morning, there will be a guided tour, including the historic entrance hall, grand hall, stage, dressing and rehearsal rooms, as well as the radio broadcast and Internet live streaming studios. After lunch, there will be discussions with Dominique Meyer, the Director of the Vienna State Opera, and members of the administrative staff.

In the evening, everyone taking part in the Broadcasters’ Day is invited to a performance of "Wozzeck" by Alban Berg, conducted by Daniele Gatti. The cast includes Matthias Goerne/Wozzeck, Herbert Lippert/Drum Major, Evelyn Herlitzius/Marie and Herwig Pecoraro/Captain.

More details concerning the schedule will be sent to you in due course.

For colleagues wishing to stay another day in Vienna, we can offer:

- either: a concert performance of the rarely performed opera "L'Olimpiade" by Josef Myslivicek (libretto by Pietro Metastasio), on 28 March 2014, 19.00, at the Theater an der Wien. Vaclav Luks  conducts Collegium 1704 and a cast including Johannes Chum, Simona Saturova, Raffaela Milanesi, etc.

- or: a stage production (directed by the famous actor Helmuth Lohner) of "The Magic Flute" by Wolfgang Amadeus Mozart at the Vienna Volksoper, also on 28 March 2014, 19.00. The cast includes Jörg Schneider/Tamino, Walter Fink/Sarastro, Birgid Steinberger/Pamina, Beate Ritter/Queen of the Night, Klemens Sander/Papageno, etc.

There is also the possibility to arrange for guided tours of the Theater an der Wien (the theatre where Beethoven’s "Fidelio" and Lehár’s "The Merry Widow" were first performed) and/or of the Vienna Volksoper on 28 March 2014.

Please inform Uschi Preisig, Michael Blees and Irene Legris by 7 March 2014 of your participation, indicating in particular which of the optional events on 28 March you will take part in.