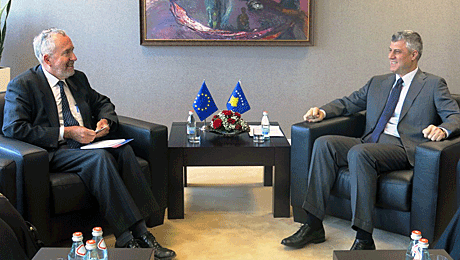 The EBU has urged Kosovo’s government for more funding for Radio Television Kosovo (RTK) after the successful launch of two new channels.

RTK last week began broadcasting a 24-hour news channel (RTK 3) and a second generalist channel (RTK 4) in the majority Kosovo language of Albanian. The channels are available over cable and the Internet.

The launch was marked at a ceremony in Pristina on 13 March addressed by RTK chairman Rrahman Pacarizi, RTK Director General Mentor Shala and EBU Head of Member Relations David Lewis.

“Only months after the launch of RTK 2, the channel in Serbian, this is another important step in the development of Kosovo’s public service broadcaster,” Mr Lewis said (full speech available here), conveying the EBU’s congratulations also on RTK’s recent transition to full digital editing in its newsroom.

The EBU established RTK in 1999 after the Kosovo War under a memorandum of understanding with the Organisation for Security and Co-operation in Europe. It operates out of buildings previously used by Radio Television Pristina (RTP).

Mr Lewis told guests at the ceremony that RTK is working miracles on a shoe-string budget (little more than €10 million annually, or 0.7% of the country’s annual budget, minus deductions, or one of the lowest in the region) but that it needs more resources to achieve its potential in service of Kosovo’s citizens.

Mr Lewis also called for RTK to receive more financial support in separate meetings on 14 March with Kosovo Prime Minister Hashim Thaçi and with members of the parliamentary media committee. And he stressed the need for the assets of RTP to be transferred formally to RTK. This would enable RTK to bring its different media and channels together in an appropriate building on one site.

RTK is a beneficiary and active participant in an EU-supported EBU Action Plan to strengthen public service media in the Western Balkan EU accession countries, which include Kosovo.

The prime minister thanked the EBU for its support of RTK and said he had full confidence that the broadcaster was moving in the right direction. He recognized RTK’s need for greater financial support, and pledged to “try the maximum to help on this issue”. He also recognized that RTK should be left alone to work freely.

EBU Director General Ingrid Deltenre, in a letter copied to Prime Minister Thaçi, wrote to all members of the Kosovo Assembly last month protesting against attempts from all political groupings to pressure RTK for privileged coverage.

Mr Lewis also met Ramë Vataj, Chair of the Assembly’s media committee, and two of his fellow committee members. The committee members said that Kosovo’s budget will be revised in June, and that it was hoped to find “supplementary allocations” for RTK at that time.  They also held out the hope of the property issue being solved – although a large problem remains of how to deal with former employees of RTP.