Vienna, 14 May 2010 – 16 year old Eva-Nina Kozmus was awarded the coveted title of the "Eurovision Young Musician" for her interpretation of the concerto for flute, 3rd mvt., Allegro scherzando by Jacques Ibert. Born in 1994 in Celje, Slovenia, she began playing flute and piano at age 7. She is currently an undergraduate at the Ljubljana Music and Ballet Conservatory. Eva-Nina Kozmus began competing in 2005 in an international flute competition in Serbia and has since gone on to compete in several competitions in Slovenia, Serbia, Croatia, as well as Italy. She is a member of the Ljubljana Music and Ballet Conservatory Symphony and Chamber Orchestra and performs with several renowned international orchestras. 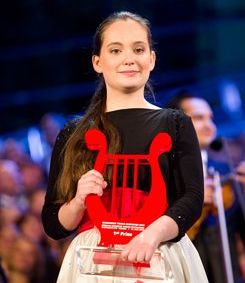 The winner was awarded a master-class scholarship. The three winners were awarded cash prizes, together with a "Eurovision Young Musicians" trophy.

The seven Finalists, shortlisted from 15 competitors, aged from 13 to 19, performed live during the competition's Final, which marked the opening of the Wiener Festwochen (Vienna Festival) at the Rathausplatz (Vienna City Hall square). The talented musicians, performing a wide range classical music compositions, performed in front of a vibrant audience of tens of thousands at the square. The young musicians were accompanied by the ORF Vienna Radio Symphony Orchestra (RSO), conducted by the 30 year old German conductor Cornelius Meister, recently appointed Music Director and Principal Conductor of RSO.

This year's competition is the third-consecutive coproduction between Eurovision TV/EBU, ORF, and the Wiener Festwochen.

Ingrid Deltenre, newly appointed EBU Director General, comments "We have experienced a true cross-border event for young European talent. By bringing them together, we create a dedicated and unique community, one of the EBU’s prime goals. Public Service Broadcasters have captured this memorable musical moment, and have brought the future of Europe’s classical music to your homes". 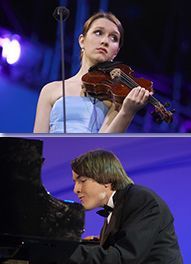 The winning contestants were chosen by a top-class international jury presided over by Hungarian composer, conductor and teacher, Péter Eötvös, who combines all three functions in an internationally high profile career. The other members of the jury were: Werner Hink from Austria, a former concertmaster of the Vienna Philharmonic Orchestra. Alexei Ogrintchouk, originally from Moscow, and one of the most outstanding oboists performing today, who is now first solo oboist of the Royal Concertgebouw Orchestra, Amsterdam. Cristina Ortiz, from Brazil, is among the most respected pianists in the world and has performed with the Berliner Philharmoniker, Wiener Philharmoniker, and the Chicago Symphony, among many others. Ben Pateman, an outstanding flautist from England is presently an A & R Executive Producer and Director of DVD at Decca Records.

*11 broadcasters showed the competition live. The competition was filmed and delivered to the Eurovision Network in HD, 5.1 Dolby stereo.

The 2010 Eurovision Young Musicians, Eurovision TV’s flagship classical music event, watched by 2 million homes across Europe and beyond, sees it 15th edition this year. Since its foundation in 1982, this biennial competition for young talented musicians has been an important and effective tool for fostering the careers of promising talented musicians in Europe, by allowing them to perform to the widest possible audience.

Artists such as Julian Rachlin, Lidia Baich, Nathalie Clein and Julia Fischer have won the competition and with that success have launched their international music careers
For the latest information about Eurovision Young Musicians, including a photo gallery, please visit the official website: www.youngmusicians.tv

The European Broadcasting Union (EBU) serves 87 national media organizations from 56 countries in and around Europe. It promotes the values and distinctiveness of public service media in Europe and around the world. It brings news, sports, events and music to your home through the Eurovision and Euroradio networks. The EBU develops and shares best practices, media expertise and innovation. It produces and exchanges rich and diverse programmes across all media.

Eurovision TV collaboration at the European Broadcasting Union offers its Members a unique platform to exchange programme ideas and best practices resulting in high quality coproductions in all genres including animation series, music and dance, documentary, science and education, fiction, and of course the annual mega-show the Eurovision Song Contest. 86% of EBU Members are involved in Eurovision TV coproductions. www.eurovisiontv.com