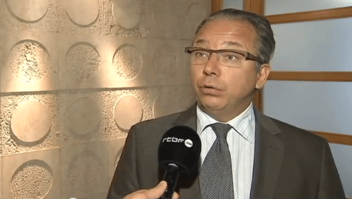 EBU President Jean-Paul Philippot today condemned the Greek government’s overnight shutdown of its national broadcaster ERT as an act of violence and “the worst kind of censorship”.

In a statement to Belgian TV station RTBF, of which he is also the Director General, Mr Philippot said the voice of democracy was being brutally silenced in Greece “because the Greek government has sent in the police to cut off a broadcaster and stop journalists from doing their job”.

Mr Philippot's comments come in the wake of a joint open letter which he and EBU Director General, Ingrid Deltenre, sent to the Greek Prime Minister exhorting him to revoke his decision. The letter can be viewed here.

Despite the government'smove to axe the broadcaster, ERT staff today took a stand, continuing to produce and distribute news material via the EBU's Eurovision News Exchange, in Geneva.

1: “When the microphone of a journalist is cut off, it’s like the voice of democracy being silenced. This has just been brutally done to 1,300 journalists – brutally in all senses because the Greek government has sent in the police to cut off a broadcaster and stop journalists from doing their job. That is the voice of democracy, the counterweight, a pressure group, that the government, the economic power is gagging.”

3. “The idea of cutting the signal and sending screens black is the very worst kind of censorship. It’s a violent assault on democratic debate which is not acceptable.”