Euroradio launches 'Europe 1914 - Audio Snapshots from a Continent at War' 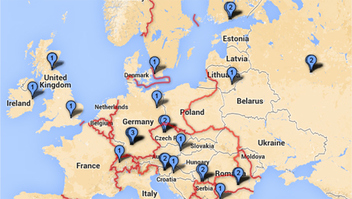 Audio vignettes that evoke a specific moment from the first world war have been premiered as part of a unique collaborative project involving more than 20 Euroradio broadcasters from the European Broadcasting Union (EBU).

The series of short radio dramas launched as ‘Europe 1914 – audio snapshots from a continent at war’ – were commissioned in February this year and showcased by Members of the  Euroradio Drama Group which met in Stockholm (6/6) at the invitation of Swedish Radio, (SR).

Project manager Laurent Marceau said broadcasters were invited to produce a short audio snapshot according to a flexible brief.

“The idea was that the audio should evoke a particular moment, fictional or actual, that offers audiences a way to experience life in different countries as war became a possibility and then a reality,” said Mr Marceau.

“Participating broadcasters now have the possibility to insert on their own websites the map featuring these  vignettes in their original language.”

The concept for the project was developed by Marie Wennersten from Swedish Radio, (SR), which hosted the Euroradio Drama Workshop last week.

"We all know that in order to understand the present, we need to understand the past,” said Marie Wennersten (SR Sweden and Member of the Euroradio Radio Drama Group). “100 years on, we can visualize new ideas and strands of hope rising from this simple yet tangible radio drama project.”

Participating broadcasters will be able to link their website to a specially created Europe 1914 online map, which provides access to the audio dramas and a geographical-interactive perspective of how WWI touched the lives of Europeans across the continent.

Serbia - RTS
When the Saints Are Marching to Drina
Heroines

Slovenia - RTVSLO
Letters from the…
Prophesied

Sweden - SR
In the Sea of Black-clad Men

Visit the World War I Centenary portal to discover other related projects.