The 2016 Eurovision Connect awards have taken place in Prague (May 19). The ceremony was part of an annual event that pays tribute to the best in public service media advertising.

The Outstanding Promo award went to France 5 for their innovative "Domestic Violence'" campaign, while the Best Overall Campaign went to the BBC for "Master Brand – Golden Thread". Arte took the prize for Best Channel Branding.

Around 150 media marketing professionals from across Europe gathered for the awards hosted this year by Czech Television as part of the 2-day Eurovision Connect event which explores innovation, creativity and excellence in broadcast marketing in all its forms, traditional and new. France Télévisions, RAI and BBC received the highest number of awards.

Other trophy winners included RAI for Best Promo of a Cultural Programme – “Cinecitta”, SVT for Best Conceptual Idea on a Low Budget – “World Figure Skating” and NRK for Best Use of Music or Sound in a Promo – “WC Chess”. A full list of winners is below.

Attending the event EBU Media Director Jean Philip De Tender said “Once again public service media has shown itself to have the most creative people designing some truly original and impactful campaigns. Congratulations to all the winners here in Prague.”

Eurovision Connect conference participants can view promos and campaigns of the winners and nominees for all categories on the Eurovision Showcase platform (login required).

Best Use of Graphic Design in a Promotion – RA1, Autism – A World in a Bubble

Best Promotion for a Documentary or a Current Affairs Programme – France 5, Domestic Violence

Best Promotion for a Children's Programme - RAI, More Than Ever Christmas

Best Use of Music or Sound Design in a Promotion - NRK, WC Chess 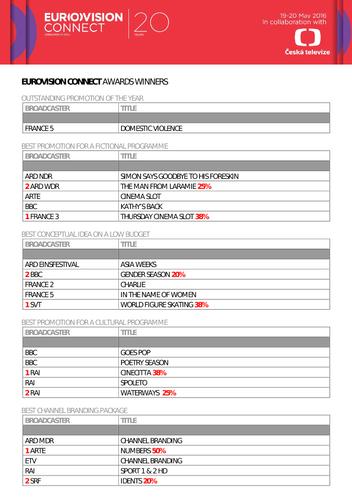