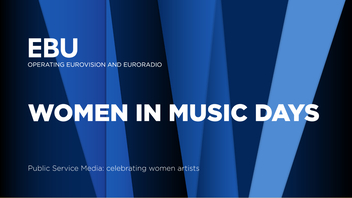 The European Broadcasting Union (EBU) is launching a brand-new initiative – “Women In Music Days” - on or around 8 March 2020, which is UNESCO’s International Women’s Day.

400 public service media radio broadcasters, from Germany to the US, from Australia to Romania, will show their support to women across all levels of music, by dedicating airtime to play musical - or related content – exclusively by women.

From classical to rock/pop through jazz, women have been breaking boundaries in music for centuries - but evidence suggests that the glass ceiling has proved a tougher prospect.

A recent study by the EBU’s Media Intelligence Service looked at gender ratios across live performances, streaming platforms and by genre. Findings included: women make up just 30% of the entire workforce in the music industry. Just 10% of Grammy nominees between 2013-19 were female; in classical music, 31% of musicians in the world’s greatest orchestras were female (2018); and major record labels had a gender pay gap of 34% in favour of men (2018).

Noel Curran, Director General, EBU: “The Women In Music Days will celebrate women’s achievements as composers, as songwriters, as performers and artists.  And not before time. Despite women’s achievements across all music genres and specialisms, real barriers to female access and inclusion remain. We are committed to working together with the music industry to promote fairness, diversity and inclusion – for the benefit of everyone.”

Tony Hall, Director-General, BBC and EBU President: “This landmark EBU initiative marks the coming together of public service media organizations to really celebrate the incredible contribution of women to music – a contribution which has too often been unrecognized and under-valued in the past.

“Representing society in all its diversity is a core tenet of public media, ensuring we properly reflect the communities we serve. This initiative is fundamental to that aim and has the potential to initiate new conversations, ask pertinent questions about female representation, and ultimately promote gender equality at all levels.”

EBU Members are delivering a vast range of programming in support of the project, from special concerts to features and interviews, including: a dedicated female line-up at the BBC 6 Music ‘Festival By Night’ event in London; a feature on ORF’s FM4 (Austria) entitled ‘The past, present and future of female Hip Hop’; a live Jazz concert on FIP (Radio France) with singers Rhoda Scott and Anne Ducros; and a recital devoted to the works of Romanian contemporary women composers. Consult the full list of participating channels

While music is at the heart of the project, the initiative will also showcase related programming that emphasizes the contribution of women across wider themes and topics.

EBU Member ARD, Germany, emphasizes the importance of the project and why they are supporting it: “The ‘Women In Music Days’ are intended to raise society's awareness of the unequal treatment in the music industry and to encourage a rethink in the industry through education. For this reason, we at ARD are united on these days.”

In an interview given to Euroradio in 2019, Pauline Black, actress, broadcaster and lead singer with The Selecter, said “These days, I think a lot more women are engaged in music but it needs women engaged at all levels, not just singers fronting bands and things like that – but in production, in the record companies, and people going out and looking at bands, nurturing bands and bringing along song writers in certain ways.”

Marin Alsop, Chief Conductor, ORF Vienna Radio Symphony Orchestra, “It is gratifying to see that my efforts towards a successful career as one of the first women conductors can have a big impact on younger generations who share the same passion. When I started, most people didn’t believe I would ever achieve my dream. Today women are undoubtedly on their way, taking positions that have been out of reach for centuries. Positions, they are entitled to achieve, just like their male colleagues.  Of course there is still more work to do: more glass ceilings have to break; archaic prejudices have to be overcome; structures have to change; and power has to be shared. This is why I started the Taki Concordia Conducting Fellowship in 2002. I realized that if I didn’t try to impact the landscape, who would do it? Please join us and be a part of the change!"

Hannah Kendall, Composer, “It is with great pleasure that I support the EBU’s Women In Music Days. We must continue to actively support, highlight, and celebrate the brilliant work of women music creators until we achieve balance and equality in the industry. A diversity of voices leads to a broader range of stories that reach, and can speak to, a wide group of people; engaging listeners in a spectrum of sound-worlds that can impact their lives in meaningful ways.”

The Women In Music Days initiative is scheduled to happen on or around UNESCO’s International Women’s Day on 8 March.