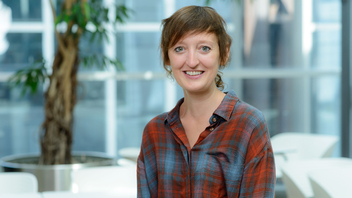 Edita Kudláčová, a senior radio and audio executive with over 12 years’ experience at Czech Radio, has been appointed as Head of Radio at the EBU. She will take up her position in March 2021.

Her work has won multiple awards, including first prize for Best European Online Project at the 2019 Prix Europa for ‘1968 Project’, an initiative that also won the Journalism Award in the category for best online journalism. She also claimed first prize for best public service podcast with ‘Turn The Lights Off!’ in the 2018 Podcast of the Year awards. Her experience includes extensive collaboration with public service media outlets and she is currently a member of the EBU’s New Radio Group and, prior to that, the International Relations Radio Group until 2016.

Edita said, “I’m delighted to join the EBU where I have been active as a Member for many years and now will be proud to represent and advocate for Members at a broader level. I’m passionate about radio and audio and I believe strongly in the power of these mediums to create fantastic content and in their potential to innovate and develop. I’m really looking forward to working with the team at the EBU.”

Edita will play a pivotal role in the EBU’s Media Management team, bringing into play her public service radio credentials and management skills. She will also be key to the EBU’s Member representation, through its committees and advocacy initiatives, and central to initiating collaborations in the radio and audio genres, developing strategy, and sharing best practice.

She takes over from Graham Dixon, who is retiring at the end of the year.

Jean Philip De Tender, Director of Media, EBU, said, “We’ve searched extensively for the heir to the excellent legacy of Graham Dixon, our current Head of Radio, and I’m delighted to welcome Edita to the EBU. Edita is already well known to our community, having been highly visible in the New Radio Group and at our industry events. Her track record in innovation, inspiring creativity and delivering award-winning projects makes her a dynamic addition to the EBU Media Management team.”

René Zavoral, Director General, Czech Radio and Vice-Chair of the EBU Radio Committee, said, “It is with mixed feelings that Czech Radio says farewell to one of its most inspirational employees. Edita has championed change and innovation at Czech Radio and developed new ideas and concepts into concrete projects, which have been instrumental in the overall transformation of the organization. We’re delighted that her talent has been recognized with the Head of Radio role, but we’ll miss her collaborative spirit, her energy and her passion for everything audio. Happily, we’ll still be working together through the work that the EBU does with its Members, with the common goal of advocating for public service radio.”

Graham Dixon joined the EBU in 2015 from the BBC, where he had been Managing Editor, BBC Radio 3. In five years, as EBU Head of Radio, he encouraged Members to meet the challenges offered by a vibrant, increasingly complex radio and audio environment, by, among other things, strengthening the focus on youth radio, archives and new distribution possibilities. He also successfully fostered active EBU participation from countries which had previously not been so fully involved in the radio area.