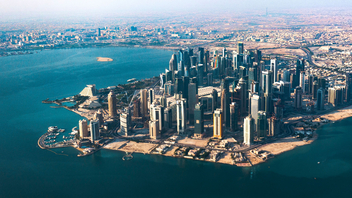 Two journalists from Norwegian public broadcaster NRK, an EBU Member, were arrested last week in Doha and kept imprisoned for almost 32 hours from 21 to 23 November. All equipment was taken from them, and they were not allowed to contact anyone.

While doing their job just one year before the FIFA World Cup 2022 in Qatar, they visited a construction site with proper authorization. They strictly followed the rules requested by Qatari officials and the site’s local manager. But later that evening they were arrested at their hotel by men who presented themselves as police. While in custody someone broke into the journalists’ computers and mobile phones and thus gained access to confidential content and information. The journalists were released without a charge on the morning of 23 November, but without their equipment being returned. They left Qatar late the following night.

This incident represents a serious violation of the freedom of the press and the legitimate right of journalists to perform their job in accordance with the principle of freedom of speech, as stated in international conventions, such as the International Covenant on Civil and Political Rights Article 19, adopted by United Nations, and the European Convention on Human Rights Article 10.

Qatar has ratified the International Covenant on Civil and Political Rights adopted by United Nations (OHCHR). The Covenant's Article 19 corresponds to Article 10 of the European Convention on Human Rights (ECHR). According to case law arresting of journalists in such a situation is a clear violation of the OHCHR Article 19/ECHR Article 10, even if the authorities believe the journalists have filmed without permission. The filming and interviews were done openly and with the approval from those present.

The EBU News Committee firmly condemns this unacceptable behaviour and urges Qatar to respect freedom of expression and to ensure that the international press can carry out their work without such interference from the authorities in the future.