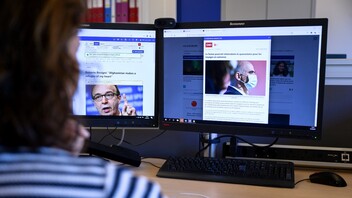 Launched in July this year, “A European Perspective” responds to surging demand for trusted news against the backdrop of conspiracy-fuelled disinformation campaigns and populist rhetoric.

Over the past five months, articles published through dedicated feeds on the broadcasters’ websites have been viewed nearly 24 million times. With over one million reads, “A European Perspective” has a click-through rate of around 4.5% -- well above the industry standard.

Eric Scherer, Chair, EBU News Committee and Director of Innovation and International Affairs at France Télévisions, said, “This pioneering initiative allows public service media to open new windows for our fellow citizens while others are busy closing them.”

This view was echoed by Delphine Ernotte Cunci, President of the EBU which coordinates the project as part of the EBU Group with its office in Brussels. She said, “The ability of European public service media to provide quality news from other countries within Europe and to make it available in multiple European languages is not only a natural extension of our public service remit, but also serves as an important corrective for the (largely unchecked) dissemination and distribution of fake news and disinformation through social media.”

The initiative has considerable potential for expansion, drawing on the combined resources of Europe’s public service media which invest an estimated €5.8 billion per year in their newsgathering operations.

It has also given the participating broadcasters a unique chance to road-test AI and machine-learning tools. These include the EBU’s EuroVOX, designed to ensure that audiences get the content they want in a language they understand, and the PEACH system for personalization and recommendations.

The opportunities for professional exchange and innovation have been widely appreciated. James McNamara, Editor at RTÉ News Digital, said, “‘A European Perspective’… has provided us with an important window on the work of our colleagues in public service media across Europe. It gives us a real-time handle on how we are all covering our shared experience of the pandemic.”

“A European Perspective” is driven by a state-of-the-art digital hub hosted by the EBU which fields more than 2,000 articles a day. That includes verified eyewitness and social media content sourced by the Social Newswire by Eurovision News. It offers participating broadcasters access to a rich seam of trusted content that embraces shared editorial values.

Part of the creation and operation of the digital hub – the heart of  “A European Perspective” has been made possible by a grant from the European Commission’s DG Connect which has also supported the launch of a complementary service, “The European Collection”, led by ARTE.