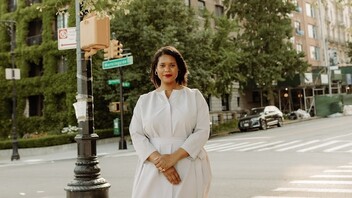 For its 70th anniversary in 2020, the European Broadcasting Union commissioned a new orchestral piece to highlight the importance of public service media’s role in nurturing and promoting fresh European talent. ‘Nexus’, by British composer Hannah Kendall, was commissioned for the European Union Youth Orchestra (EUYO) and commemorates the 250th anniversary of Beethoven’s birth. Postponed due to the pandemic, the piece’s world premiere - under the baton of Gianandrea Noseda - will take place on 16 August 2022 at Bolzano Festival Bozen and will be broadcast live by RAI Radio 3. In this ‘3 questions to’, Hannah Kendall tells us about the main ideas which inspired the work.

Q: 'Nexus' commemorates the 250th anniversary of Beethoven’s birth. In the composition, you mirror his 5th Symphony with important political events occurring in the same era. How is this portrayed in the music? And what does the title ‘Nexus’ mean?

A: In the piece that I wrote for the European Union Youth Orchestra I aim to mirror some aspects of the 5th Symphony through some of the gestures, tonalities, keys that Beethoven himself incorporates into his own piece. Also, I draw on aspects of Afro diasporic folk songs, transcribing them into music boxes. This is because I was particularly drawn to the fact that in 1808 when Beethoven’s 5th Symphony was written, it was also the same year that the act prohibiting importation of slaves to the United States took effect. I was really interested in looking back on that time and looking at those connections within history, which is why the piece is called ‘Nexus’. The word means ‘a complicated series of connections between different things’. And rather than focusing just on Europe, or just on what was happening in the Americas, I wanted to aim to kind of bring those historical themes into an interweaving connection. Primarily, that's because of my own heritage which is African Caribbean, but also very much European. I wanted to try and at least aim to bring together these lots of different aspects in the piece.

The piece was written for the European Union Youth Orchestra, which unites the idea of nurturing young talent for future generations with a shared sense of European heritage. How did those elements influence your work in 'Nexus'?

I am particularly interested in this idea of shared sense of heritage, and in this case, the shared sense of European heritage, because that is certainly something that I have enjoyed as a musician, as an artist, the sharing of ideas, of practice, which is only a positive thing and has wholly shaped the development of my own compositional approach and style. I suppose these aspects very much influenced the centre of the work ‘Nexus’, choosing to incorporate traditional European songs, specifically those by Beethoven, and interweaving them with traditional songs from elsewhere, that might be considered as being non-European Afro diasporic. But what's fascinating about these folk songs that were first sung, first composed, on the plantations in the Americas, is that they were very much influenced by the European presence, for obvious reasons. So it's this kind of cyclical pattern that I'm interested in exploring more and have tried to bring into the work.

For me, public service media is vital. It is absolutely about the dissemination of thoughts, ideas, music, art, all sorts of things. But it's fundamentally about connecting a wide, broad, diverse range of people together.

Hannah Kendall’s ‘Nexus’’ world premiere by the European Union Youth Orchestra at Bolzano Festival Bozen is available in MUS under reference SM/2022/07/14/01. The concert’s programme also features Rachmaninov’s ‘Rhapsody on a Theme of Paganini’ and Stravinsky’s ‘Rite of Spring’.