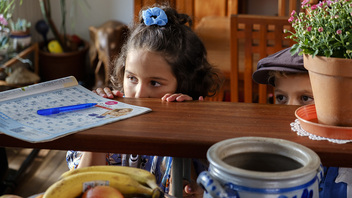 The Children’s Drama Exchange shares high-quality, original dramas for an audience aged 6 to 9.

The stories feature 8 to 9-year-old children from all social backgrounds who play an active role in their own and others’ lives.

With a minimum of dialogue, the story is told through strong emotions that the young audience can empathize with, and a chain of actions and reactions.

The series is produced following a special theme whose aim is to link the films together. The common "Tell me a Secret" theme and branding gives the series a unique narrative and visual identity.

For more than 20 years, the series has been based on the principle of ‘make one, take all’, where each broadcaster produces one episode and receives the others for free.

The only other cost a participating country has to bear (apart from the production ones) is a contribution to a central budget covering the executive producer's and a part of the EBU’s coordination costs.

The series from previous years are available for sale. Please contact the EBU for further information.

10 years (as of 31 December of the production year) / exclusive, transferable and worldwide in any language.

Duration
15’ Drama episodes. The number of programmes varies between 5 and 10 (or more)