EBU teams up with BBC and LSE for major news conference 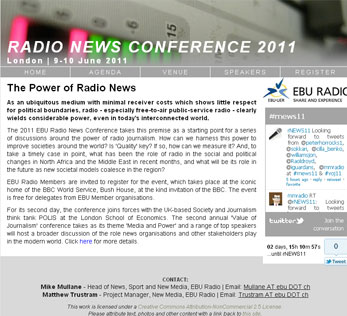 The EBU Radio News Group is delighted to have joined forces with the POLIS think tank, the BBC College of Journalism and the Thomson Foundation to produce one of Europe's most prestigious journalism conferences.  Around 700 people are expected to attend the second annual Value of Journalism meeting, which will take place at the London School of Economics, on Friday 10th June.

The conference will explore the political power of journalism, with debates focusing on the Middle East uprisings and Wikileaks. It will look at how the global financial crisis and the new opportunities offered by interactive technologies are transforming newsrooms and how this is affecting the relationship between journalism and power.

The EBU's Head of Radio News, Sport and New Media, Mike Mullane, looked forward to the conference.
"This is an important event for anyone who cares about the future of public service journalism. The Radio News Group has combined its know-how with the experience of the BBC, POLIS and the Thomson Foundation to create a can't miss appointment."

The Thomson Foundation is an international media for development NGO, which specialises in training.

POLIS is a joint initiative of the LSE's Department of Media and Communications and the London College of Communication, aimed at working journalists, people in public life and students around the world.

The BBC College of Journalism was formed in 2005 and teaches all BBC journalists in the UK and around the world.