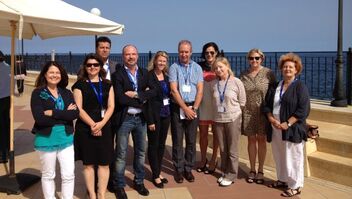 100 training managers, journalists, strategists, project managers and CEOs from 36 EBU Members and 26 countries attended the 2014 Eurovision ACADEMY Assembly on 9 & 10 October. Hosted by PBS, Malta, these two days were dedicated to "Public media and digital audiences: be innovative and keep on learning".

The Assembly was opened by Tonio Portughese, the Chairman of the Board of Directors of Public Broadcasting Services of Malta. Organizing the Assembly in Malta put the participants at the heart of the Mediterranean culture and reminded everyone of the richness and diversity of the EBU.

The main theme running through the event was innovation and its importance in maintaining the relevance of public service media (PSM). It was highlighted that there has never been a more urgent need to innovate, while keeping PSM's commitment to distinctiveness and demonstrating its value to audiences, politicians and business.

Peter Salmon, Director of BBC England and the newest EBU Executive Board Member, made an inspiring keynote speech ("New Places, Faces and Voices: Finding and training the best people for Public Service Media") to the Eurovision ACADEMY Assembly looking at the connection between public media and digital audiences, arguing that if PSM is innovative and brave, the rewards were great.

Mr Salmon also offered advice to Members about why they should "provoke and stimulate their colleagues" into considering where media is heading and how they can improve. (Watch the interview with BBC's Peter Salmon, conducted by Gunnar Grønlund from Norwegian broadcaster NRK).

The journey into innovation continued with MoJo (mobile journalism) and "intrepreneurship". Mobile devices have changed how we can both gather and distribute content. It increases speed, flexibility and efficiency when bringing verified and trusted quality content to your audiences when and where they want to hear it.

The Assembly also focussed on the evolution of professional journalism towards greater autonomy, to the extent that journalists are becoming “intrapreneurs”. Their job is no longer just to find content, but also to promote and identify new mediums of expression.

Benoit Califano, Director, ESJ Montpellier
"We need to train start up journalists who can combine content, technology and business"

Discussions moderated by Eurovision ACADEMY Faculty member Martina Chapman also looked at the various challenges PSM face now and in the future including:

The Assembly culminated in the election of a new Eurovision ACADEMY Committee, as seen in the photo at the top. From left to right:

Tweets from the Assembly can be found by searching (#EBUinnovate)