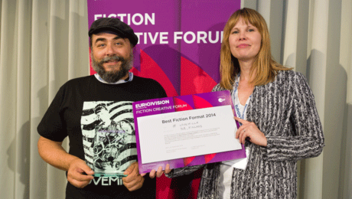 #lovemilla, packaged as a 70 episode-three season series was singled out from a field of 10 original formats on themes ranging from criminal and short drama, to family and historical fiction.

Trailers were presented to around 45 television executives from the EBU television community by the producers, who in turn fielded audience questions about the format’s development.

Liselott Forsman, EBU Head of Fiction Bureau and YLE Executive Producer of International Fiction Projects, congratulated producers Riikka Takila and Jani Pösö on their win. Ms Forsman, who did not participate in the vote, said the outcome highlights the growing interest among fiction-makers in creating three-to-six minute formats attractive to younger audiences.

“This format is a winner on many levels,” Ms Forsman said. “The themes are universal, the format can be adapted by EBU Community Members everywhere, it attracts young audiences, making it truly deserving of the description ‘format’. Today has seen many creative new ways to combine public service ideals with new fiction forms. The EBU is the only forum in Europe to provide a platform through which public service fiction formats can be traded and exchanged.”