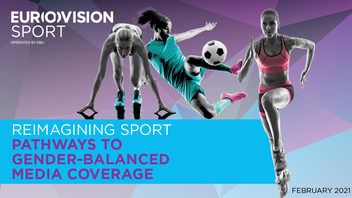 Eurovision Sport is delighted to announce the publication of a new media handbook, ‘Reimagining Sport: Pathways to Gender-Balanced Media Coverage’, as part of its mission to drive greater and more consistent coverage of women’s sport across the EBU territory.

The handbook is published ahead of International Women’s Day on 8 March, 2021.

Although the COVID-19 pandemic has had a disproportionate negative effect on women’s sport, exposing vulnerabilities that show it still has a long way to go to reach parity with its male counterpart, the handbook argues that: ‘the successes of the last few years have demonstrated that with the right amount of investment from all stakeholders in the sports ecosystem, the women’s game can continue to grow and be just as entertaining, as attractive, and as first-rate as men’s sport’.

The handbook continues: ‘We, at the EBU, are determined to do our part to address this imbalance so that women’s sport continues to spring just as high. We know that by showing more women’s sport and, in turn, more female sporting role models, we can help inspire the next generation, challenge biases and stereotypes, and better reflect our diverse audience’.

In addition to analysing and assessing the position of women in sport and in sports broadcasting in 2021, ‘Reimagining Sport: Pathways to Gender-Balanced Media Coverage’ contains a range of recommendations and suggestions to help broadcasters, rights-holders and sports bodies increase gender equality in sport.

In a foreword to ‘Reimagining Sport: Pathways to Gender-Balanced Media Coverage’, Glen Killane, Executive Director of Eurovision Sport, writes: ‘Promoting women’s sport is perfectly aligned with our values. As public service media, it’s part of our mission to reflect all the communities we serve and some of the most inspiring work of our Members springs from this sense of responsibility’.

Cliona O’Leary Deputy Head, TV Sport at Ireland’s RTE, and Chair, Women’s Sport Expert Group, adds: ‘Significantly, when the EBU surveyed members late last year, it found 92% of us see gender equality in our sports coverage as important, and this handbook has been designed to help the members who don’t have any strategy to address it.

‘Public service media has more permeation of society than most other media and working in an area which often delivers the biggest audience for our channels we have great potential to convey important messages of inclusivity, often in positive celebratory environments’.

Elsa Arapi, Glen Killane and Cliona O’Leary are all available for interview.