The EBU has relaunched the former Radio Development Fund as the Radio Innovation Fund, specifically designed to help EBU Members develop projects which are going to have a long-term impact on the medium.

The new emphasis on innovation in radio parallels those EBU Member organisations where separate innovation departments have been established to provide energy and inspiration throughout their organisations.

Radio is a fast developing medium, constantly adapting to serve the needs to listeners.  In the past decade it has engineered fantastic synergies with the internet in general, developed on-demand services and podcasts, as well as becoming digital in many countries.  Production methods have changed too, as the smartphone has become a viable tool in many circumstances.  Despite the doom-laden prophesies of its premature death at the hands of television, it had proved an extremely tough and resilient medium.  Years later, radio is informing still  and delighting audiences is new exciting ways.

With the Radio Innovation Fund the EBU wants to maintain the momentum.

The EBU Radio Committee will have the final decision, but are open to all types of ambitious suggestions, so long as they go beyond normal programme making.  The EBU wants to encourage Members to create new projects which they can share widely with other EBU colleagues.

Graham Dixon, EBU Head of Radio, said: "From its very beginnings, radio has been a flexible medium, open to innovative transformation. The EBU already provides significant opportunities for exchanging best practice and developments in the sector. With this initiative, we intend to play significant role in moving the medium to its next stage." 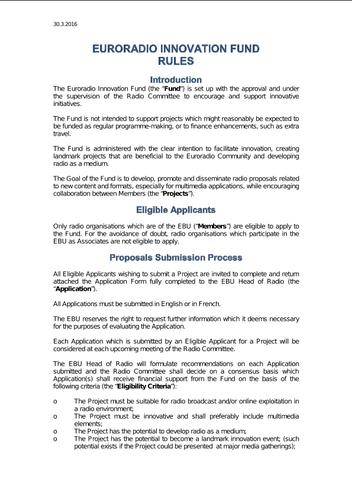