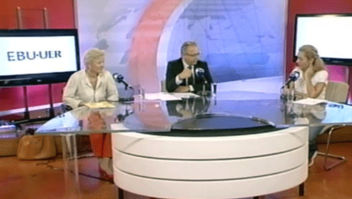 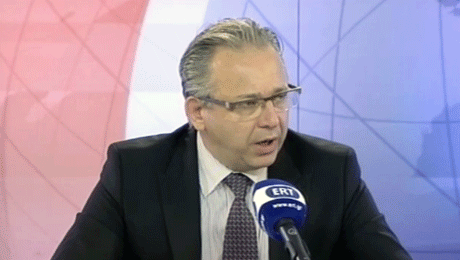 EBU President Jean-Paul Philippot told a live televised press conference in Athens today the Greek Government must urgently restore its public broadcaster ERT to air in the name of democracy and pluralism.

Mr Philippot, who has condemned Tuesday night's snap closure of ERT as “the worst kind of censorship”, added that the EBU leadership had come to Greece to help construct the new organization that will replace ERT, named NERIT.

Flanked by EBU Director General Ingrid Deltenre, Mr Philippot said: “The first reason is to support and to give this support not on behalf of the EBU, but on behalf of 100,000 workers coming from 75 public broadcasters all around Europe. We are here with the personal support of 51 director generals, presidents of radio and TV companies in Europe. They sent us yesterday and this morning personal email letters, faxes, saying 'you can speak on behalf of myself, on behalf of my company'.”

Before a bank of cameras and reporters packed into an ERT studio, as well as countless viewers around the world watching ERT on satellite and online thanks to an EBU intervention, Mr Philippot said the purpose of the visit was not to engage in political debate.

“We will have a meeting this afternoon with the Minister of Finance to give him a letter; a letter signed by Ingrid Deltenre and myself on behalf of 51 Director Generals all around Europe," he said.

Commenting on the language used in an EBU campaign to restore ERT to air, EBU Director General Ingrid Deltenre agreed that it had been “quite outspoken”.

“We said it's antidemocratic the way that it happened, but the other was also that we said it's basically unprofessional, knowing that there are always, with a broadcaster, lots of contractual obligations - not only core productions but also sports rights.”

She said: "It was breaking even last year so there were no financial deficits. It was financed by a licence fee. So even if you are going to reduce the licence fee the government will not have more money because it is actually the household that is going to pay less. And then also close down an organisation with the contractual obligations and sports rights at the last minute: you won't be able to sell them at a very good value. So what they actually did with regard to assets is a destruction of value. And we would have said that even if an organisation would have been bankrupt there are normally provisions that exactly this is not happening. And that is one of our major concerns. That we say 'how on earth could you do this?' What are the reasons behind? We don't know. But of course there are obligations and I guess this is part of the responsibility of the government to take them over if there are losses.”

Asked whether the EBU anticipated a legal backlash for using its infrastructure to stream ERT news channel NET on its website and uplink the station’s signal to a satellite, Ms Deltenre was unperturbed.

“I think we were prepared for this discussion and we think we have reasons to actually support ERT to bring the signals on air,” she said. “This is something that definitely needs to be explored more in depth. But we think we have a good reason and a good solid foundation to do this. It was of course evaluated before we did it.”