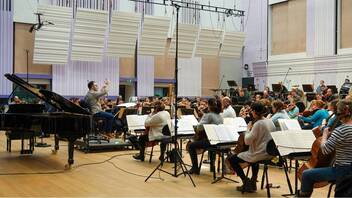 Cheers to the Centenary of the BBC Philharmonic! From its first broadcasts in 1922, the orchestra has spent 100 years reaching audiences with numerous recordings and live broadcasts. Starting out initially as the 2ZY Orchestra, then the Northern Wireless Orchestra and BBC Northern Orchestra, finally becoming the BBC Philharmonic in 1982, based at its two home cities of Manchester and Salford in the North West of England. The ensemble will celebrate its 100th anniversary with a concert on 15 October 2022 from Manchester’s Bridgewater Hall. Behind the scenes with his eyes and ears in the music and sound, is Mike George, Producer of the BBC Philharmonic for the past 24 years. Between two rehearsals, he answered our 3 questions.

Q: What do you think makes the BBC Philharmonic different from other radio orchestras?

A: I think it's different to other orchestras generally. It's an orchestra that always gives extra value in its performances, whatever it's doing. We now live in a world where we cover a much wider repertoire than when I joined the orchestra nearly 25 years ago. We cover a broad area of repertoire. And the enthusiasm with which the Philharmonic embraces this and with which it brings notes off the page is up there with the best orchestras in the world.

Can you tell us about a significant moment in the BBC Philharmonic's 100-year history?

Can I pick two? I think the game changing event was the building of a new concert hall in Manchester, our home city down the road here from Salford. With the new concert hall in 1996, the Bridgewater Hall, it meant we were able to become a much more public-facing orchestra. As well as performing around Manchester and the cities around us, it created real focus. From moving a series of probably 6 concerts in what was then Manchester's only hall, the Free Trade Hall, to a concert series of 18 to 20 concerts annually gave the orchestra a much higher profile. And  it's a fantastic hall to play in.

Other than that I would have to say… In 2005 we recorded all the Beethoven symphonies in that hall. The recordings were made available for download afterwards. No one had a clue what the result would be for the orchestra. But again on those recordings you can hear the Philharmonic absolutely on fire. The music was offered for free download after the four concerts. And we had just under, I think, 1.4 million take-ups of those downloads. It's an incredible achievement and it got the orchestra's name out worldwide.

As a producer, what do you think is the proudest moment you've achieved since working with the orchestra?

Again I'm going to pick two things. We have an association with Chandos Records for which we make a number of recordings every year without fail. It's an incredibly fruitful partnership for them and for us; we've been very fortunate over the years to pick up various Gramophone awards. The first year I was here we picked up a Gramophone award for a disc of music by Lili Boulanger who in 1999 was very infrequently performed. Happily much more performed now. And we also did the complete Prokofiev piano concertos with Jean-Efflam Bavouzet, similarly a fantastic set of discs and performances and a lovely Gramophone award winner.

There's just one other thing I would add personally, which was in 2021 in the middle of lockdown. With a fantastic audio team I was responsible for putting together a stream of 323 musicians for a short piece on the First Night of the Proms, a remarkable collage by Iain Farrington, showcasing snippets of the 9 Beethoven symphonies in a fantastic piece of work. But I would say it stretched the knowledge of everybody who worked on that project to actually make it work. I don't think any of us knew what we were letting ourselves in for when we went into it, but it's a moment I'm incredibly proud of.

The BBC Philharmonic’s 100th anniversary concert is available in MUS under reference SM/2022/08/17/09. Under the baton of Eva Ollikainen, the orchestra will perform Ruth Gipps’s Chanticleer Overture, Window Over Rackwick by Erland Cooper (world premiere) and Beethoven’s 9th Symphony. The concert will be recorded on 15 October and broadcast by BBC Radio 3 on 28 October at 19.30 BST.