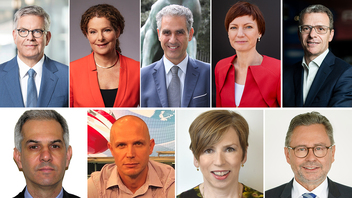 The EBU has a new Executive Board – made up of representatives of public service media from throughout Europe.

Nine board members will join the EBU’s new President Delphine Ernotte Cunci (France Télévisions) and Vice-President Petr Dvořák (Czech TV) to help lead the EBU over the next two years.

The new Executive Board were elected by Members at the EBU’s 85th General Assembly. The Board is responsible for ensuring the implementation of the EBU’s strategy and policies.

Thomas Bellut, Monika Garbačiauskaitė-Budrienė and Fran Unsworth all join the Executive Board for the first time. Alexander Wrabetz re-joins after a four-year absence.

Thomas Bellut has been Director General of ZDF since 2012 while Monika Garbačiauskaitė-Budrienė was appointed Director General of Lithuanian National Radio and Television in 2018. Fran Unsworth runs the BBC’s news and current affairs programming and is a Member of the BBC Board.

Alexander Wrabetz has served as Director General of ORF since 2007 and was previously an EBU Board Member from 2011-2016.

Cilla Benkö has been appointed for her fifth term as an EBU Board Member while Marcello Foa, Giacomo Ghisani, Sebastian Sergei Parker and Gonçalo Reis will be serving for a second term.

Incoming EBU President Delphine Ernotte Cunci said: “I’m glad we could gather a great cast of skills and experience and also keep the balance of the geographical, economical and cultural diversity of the EBU Members in the composition of the new Executive Board. For the first time, I’m also proud to include 3 women on the board.”

The Assembly warmly thanked outgoing Board members together with President Tony Hall (BBC) who has served as President of the EBU for the last two years.