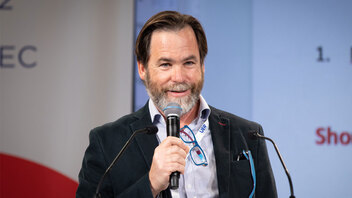 The 28th EBU Technical Assembly has elected a new Technical Committee and Chair at its annual meeting, which was hosted by France Télévisions in Montpellier this year.

Michael Nugent from Greek Member broadcaster ERT was elected as Chair of the new Technical Committee (TC), taking over from Judy Parnall (BBC) who led the TC from 2018 to 2022. Michael Eberhard from Germany’s ARD/SWR and Brian Wynne from Irish public broadcaster RTÉ were elected as Vice Chairs.

The Technical Assembly (TA) gathers high-level representatives from all EBU Members for an exchange on technical topics of great strategic importance to public service media. It elects a new TC in even years (such as 2022) and reviews the TC's new Workplan in odd years. The annual meeting is normally held in June.

The 13 elected Member representatives of the Technical Committee (TC) shape the direction of the work carried out by the EBU’s Technology & Innovation department on behalf of the EBU Membership and through the collaborative Strategic Programmes and working groups coordinated by the department.

Members of the new TC

At the Technical Assembly 2022, the outgoing TC also presented an updated version of its EBU TC Workplan, which is now valid until 2023. The Workplan sets out goals for the Strategic Programmes and working groups. Revisions included new activities focused on topics such as shared media data spaces and the closure of working groups such as on Radio production. The new TC will present a new Workplan at the next Technical Assembly in 2023.