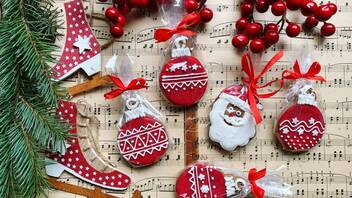 Every year, the Euroradio Christmas Music Day is eagerly awaited by listeners throughout Europe and beyond. On the Sunday before Christmas, EBU radio organizations contribute live or deferred concerts of music focused on the theme of Christmas. It has been one of the EBU’s most popular offerings ever since it first aired in 1995.

One of the keys to the Day’s appeal resides in its closeness, not only to radio listeners but also to the live audiences at the concert venues, who may enjoy traditional ceremonies or even be asked to sing along with the performers. The potential repertory is vast, ranging from traditional carols to Baroque sacred music and contemporary a cappella works.

In 2022, the Euroradio Christmas Music Day will allow European listeners to discover, or rediscover, season’s classics from 15 EBU organizations in 11 countries, with an audience who will reach listeners from all over the world thanks to broadcasts from 19 EBU radio organizations based in 13 countries. As well as featuring great choral and orchestral repertoire such as the programme offered by the Danish National Vocal Ensemble or a concert spotlighting baroque music from Europe and America in Montreal, this year’s selection will also feature hidden gems from all over the world, with traditional songs from Germany or Scandinavia, modern hits reinterpreted and timeless masterpieces like Bach’s Christmas Oratorio. To whet listeners appetite before the pièce de resistance, NDR will offer a concert from Hamburg with soprano Diana Damrau, to be enjoyed live on 17 December.

Finnish Soprano Helena Juntunen will perform in Helsinki a concert offered by Yle put together especially for the Euroradio Christmas Music Day. She said: "I'm looking forward to sharing the feeling of a Finnish Christmas with all of you. Christmas in the outer rim of Europe is more melancholic and quiet than Christmas in the middle of the continent. We enjoy every speck of light multiplied by the snow. With these songs we wish warmth, compassion and empathy to the whole of Europe and a Merry Christmas."

Gail Henry said: “It was a great pleasure to co-curate the EBU Christmas Music Day offering. Christmas music is always so special and close to our hearts. There is nothing more exciting than to hear such a wonderfully broad and eclectic array of live performances from so many different traditions and styles around Europe. We hope you will all enjoy this day-long festival of Christmas Music, as we come together this festive season, in musical celebration.”

Holger Hettinger said: “It is enchanting how diverse, creative and multi-voiced the theme 'Christmas' is at this year's Euroradio Christmas Music Day. The ingenuity and the creative energy of the musicians, ensembles and orchestras involved make this year's event particularly interesting. Curtain up for a day full of musical surprises and new discoveries, but also full of re-encounters with Christmas classics!”

The Christmas Music Day would not be possible without the longstanding technical support of BBC Radio 3.