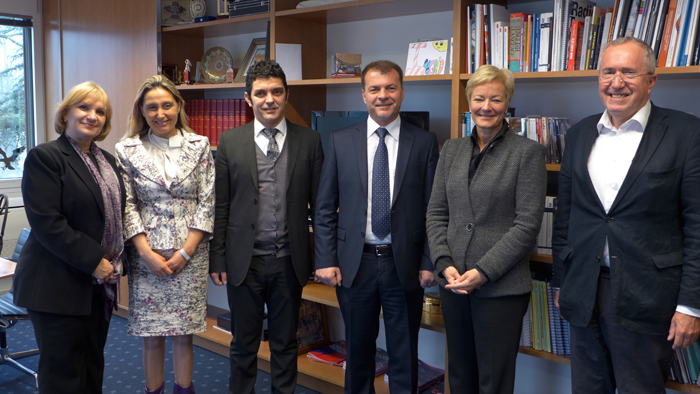 The pledge was made by RTK Board Chairman Rrahman Pacarizi at the end of a visit to EBU headquarters on 8 March with new RTK director general Mentor Shala, accompanied by international relations manager Elvana Prekazi. Mr Shala was appointed in January.

Welcoming the delegation, Director General Ingrid Deltenre stressed the importance of editorial independence and guaranteed funding for RTK, and offered the EBU's advice on digitalization and media law.

Mr Shala outlined his priorities for the coming year: the launch of a new channel in Serbian (probably in May), investment in digital production, and the securing of sustainable financing for RTK. He also has plans for a news channel and a parliamentary channel.

The RTK delegation then had a series of other meetings on legal, financial, technical and other issues, and toured the Eurovision Newsroom.

Established in 1999 by the EBU under an international mandate, RTK has been financed by direct government grant since Kosovo's constitutional court ruled in 2010 that a system of licence fees was illegal.

There are plans to re-introduce a licence fee within three years, perhaps collected through electricity bills, but Ms Deltenre suggested that a fixed percentage of the country's gross national product, strictly ring-fenced to guarantee non-interference from government, could be an appropriate alternative to finance Kosovo's public broadcaster. She said licence fees are costly to administer and might be widely ignored.

She also stressed the importance of RTK being given clear ownership of its buildings, in order to be able to develop its operations in the most efficient way.

Under the EBU Statutes, RTK cannot be a full Member of the EBU because Kosovo has yet to be recognized as an independent country by the International Telecommunications Union. However, it enjoys a comprehensive service agreement with the EBU.

RTK is one beneficiary of an EU-financed EBU action plan now being rolled out by the EBU's Partnership Programme under a Memorandum of Understanding signed by the EBU and European Union in July 2012. The plan is designed to strengthen the public service media of EU accession countries, including Kosovo.

The Partnership Programme will finance an appraisal by France's National Audiovisual Institute later this year of RTK's endangered analogue archive. And it has negotiated RTK participation in a conference to be organized by the South East Europe Digi.TV project which will take place in Budapest next month.

On 9-10 April, in cooperation with RTK, the EBU will organize a regional conference in Pristina on public service media and Roma minorities.