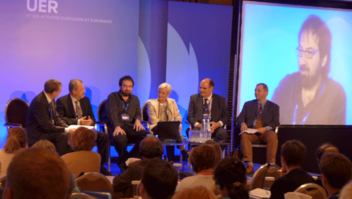 
On Thursday 10 October, a special session of the EBU Legal and Public Affairs Assembly addressed the closure of ERT and the establishment of a new public broadcaster in Greece. The title of the session was “Key success factors for an independent and sustainable public service media in Greece”.

The panellists reviewed the events that took place before and after the closure of ERT and the most recent developments, which formed the first steps towards establishing a new public service broadcaster (PSB) in Greece.

All panellists agreed that the way ERT was shut down was wrong; it was this that had caused such a strong outcry among the Greek public. The establishment of an interim broadcaster, meanwhile, divided the panel. Although it was clear to all that the current occupation of the former ERT offices and infrastructure is delaying the establishment of a new and fully operational PSB.

Dr Sotiropoulos pointed out that the way ERT was shut down, with no parliament decision or discussion and under pressure from the EU Troika, had raised public fears that the same thing could happen to other public sector entities.

However, there was general consent that, despite low ratings, ERT had been delivering many quality programmes to its radio and TV audiences – such as its investigative journalism and culture programmes – but that it had lacked political independence and transparency.

EBU Director General Ingrid Deltenre gave a detailed explanation of the EBU’s actions during this process. She said the EBU had been deeply shocked and surprised by the closure of ERT, a broadcaster that made important contributions to the EBU’s activities over the years. But she said that once the Greek Court had taken a decision to establish a new PSB, the EBU felt the right course was to respect the rule of law and the new process.

Minister Pantelis Kapsis explained that in the light of ERT’s “bad” example of overt government interference, coupled with the need to cut jobs in Greek public services, the closure of ERT seemed like a logical step forward. He said that the new Greek PSB, which is already known as NERIT, would run two TV channels as well as an international channel for the Greek diaspora and “at least” three radio channels.

Nicholas Tsimpidas, a union representative and former ERT Radio political editor, explained how he and his colleagues have been working unpaid for four months to keep ERT on air, in opposition to the interim broadcast solution. He also questioned the likely independence of the future Greek PSB, pointing out that the government would still have a strong say in the appointment of the PSB’s supervisory council.

The Chairman of the Supervisory Council of NERIT, Dr Fortsakis, explained the new broadcaster’s very broad remit and goals, which are similar to the BBC’s model and mission to inform, educate and entertain.

The EBU commented positively on the new broadcaster’s remit as well as on the country’s promising new media law. However, Ms Deltenre questioned the projected funding of the new broadcaster, which is well below its EU counterparts. She cautioned that if the new broadcaster is to win the hearts and minds of the Greek public, it will needs sufficient means to produce high quality programmes and productions and to drive innovation.

Ms Deltenre advised the Greek Government to "stay away" from the future PSB and leave it up to the new team of qualified managers to shape the future of Greece’s public broadcaster.