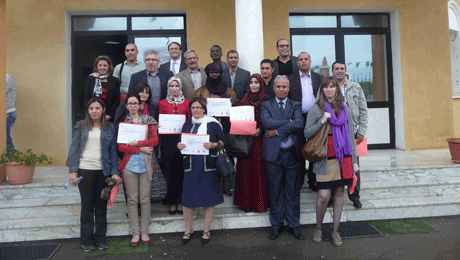 Algerian Radio's journalism training centre has produced its first 11 graduates, trained entirely by the broadcaster's in-house trainers. The programme was set up with the aid of EBU's Eurovision ACADEMY.

This project, launched 18 months ago, was developed and led by Frédéric Frantz, from Eurovision ACADEMY, working in close collaboration with CFI (Canal France International) and the ESJ (journalism school) in Montpellier.

The first stage of the project involved selecting and training experienced journalists from Algerian Radio to become in-house trainers and pass on their knowledge. It also gave them the tools to construct a complete advanced radio journalism course.

In the second stage, Eurovision ACADEMY and the team of trainers laid the foundations for the first training programme: the selection process for candidates, planning the seven modules that cover all the skills needed for radio journalism (interview, voice and writing, news bulletin, local information, ethics, information and sources, reporting) and assessment processes.

The first batch of 11 young journalists were selected from 35 candidates with a minimum of three years' experience and came from Algiers and towns further afield, such as Tamanrasset or Tiaret. They followed the 25-day course in seven modules over a period of six months to ensure they acquired a solid foundation of knowledge.

After strict continuous assessment, the journalists took a final exam for which they prepared a radio report, an article and a live news bulletin. The jury of six people comprised two heads of Algerian Radio, the director-general of ESJ, two trainers and Frédéric Frantz. All acknowledged the excellence of the candidates' work. The top student was a young woman, Manzer Salima, a journalist at Batna in the south of Algeria, who obtained an overall mark of 16.32 out of 20.

The 11 journalists appreciated the high level of competence of the Algerian trainers. "I learnt more during this course than in my four years at university," commented one of the journalists.

Double the number of candidates have taken the entrance exam for the second course, which will run from December 2013 to March 2014.