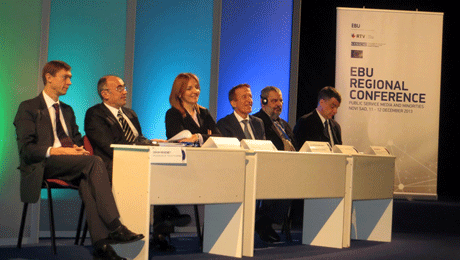 The conference was entitled "Public Service Media and Minorities" and was organised by the EBU’s Partnership Programme under an action plan co-sponsored by the European Union to strengthen PSM in EU accession countries. Fellow EBU Members from Hungary and Slovenia also attended to share their experience and practice of serving minorities.

Frans Jennekens of the Dutch public broadcaster NTR, chair of the EBU’s Intercultural and Diversity Group, gave a keynote speech, as did Professor Dubravka Valic of the Novi Sad School of Journalism. The event was also attended by governmental officials and representatives of the EU, the Council of Europe, the Organization of Security and Cooperation in Europe (OSCE) and the Sarajevo-based Regional Cooperation Council. The OSCE was a co-sponsor of the meeting, which was chaired by former EBU Vice-President Boris Bergant.

The conference was hosted by Radio Television of Vojvodina (RTV) which broadcasts in nine languages on both television and radio: Serbian, Hungarian, Croatian, Slovak, Rusyn, Ukrainian, Romany, Macedonian and German.

The meeting was in part a follow-up of a successful EBU conference in Pristina this April on Public Service Media and Roma Minorities. Concrete activities launched by that conference – including  establishment of a taskforce and an exchange of Roma programming through the Eurovision News Exchange for South East Europe (ERNO) – were reported in Vojvodina.

At the end of the Vojvodina meeting (11 to12 December), the participating broadcasters agreed the following conclusions.

A dossier of all the materials aired at the conference will be prepared and made available in the coming weeks. The conference participants decided to view themselves in future as a network for the exchange of experience and programmes on minority topics, possibly through ERNO.

Consideration will be given to establishing a “Bridge Builders’ Group” to coordinate network initiatives along the lines of the successful Roma Taskforce set up in April.

Mr Bergant said he hoped the networking made possible by the conference and its follow-ups would help to foster peace in a region long torn by ethnic strife.