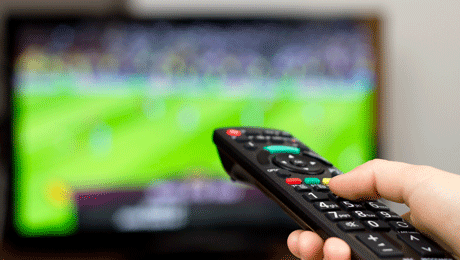 The European Broadcasting Union (EBU) welcomes the European Commission’s High Level Group report recommending that the EU safeguard access to spectrum below 700 MHz for digital terrestrial television until 2030. However, it is concerned about the early release of the 700 MHz frequencies.

The group chaired by former European Commissioner and WTO Director General Pascal Lamy looked at future use of the UHF spectrum band between 470 to 790 MHz which is essential for the broadcast of free-to-air digital terrestrial television (DTT).

DTT is the most popular TV platform in Europe, reaching 100 million households and 250 million viewers, and it is an essential, innovative platform for meeting universal obligations of public service broadcasters and delivering content to mass audiences.

EBU Members welcome the report’s recommendation that the “EU should adopt a common position against the co-primary allocation of the core audiovisual band (470-694 MHz) to the mobile service at WRC 2015”.

"The EBU believes safeguarding spectrum below 700MHz will enable public service broadcasters and the European audiovisual sector to continue reaching all sectors of the population, sustain broader content choice, and secure investments and innovation over the long term," said Simon Fell, the EBU's Head of Technology & Innovation.

Following a thorough assessment of consumer demand, network supply and Member State diversity, the report stressed that broadcasters and citizens should not be disadvantaged by the transition of DTT out of the 700 MHz band, and the costs of transition should be duly addressed.

“It is essential that broadcasters are not financially weakened by any loss of the 700MHz band.  Member States must heed the report's conclusions on compensation and transitional arrangements,” added Mr. Fell.

All costs should be offset, including investments in new and even more efficient technologies and the expense of mitigating mobile interference of DTT reception.

The EBU is concerned about the recommendations that the 700 MHz band be released to other stakeholders, especially mobile phone operators, by 2020 with the flexibility of +/- 2 years.

"There is a danger that this will not give broadcasters and viewers enough time to adapt to appropriate spectrum arrangements and ensure the necessary upgrade of DTT networks and consumer equipment, especially in countries where DTT is the main TV platform," said Mr Fell.

The broadcasting industry argues that an early release date is likely to cause disruption to TV services in a number of Member States, especially where, owing to the lack of capacity, the transition reduces the volume and quality of content offered to viewers.

The report notes that because of the "recent assignments in the 800 MHz band, the 700 MHz band is not immediately needed for mobile services" and proposes a "stock take" by 2025 to provide a factual basis for future policy decisions on spectrum allocation.

The EBU believes this should include all relevant market and technology developments as well as all relevant frequency bands for terrestrial broadcasting and mobile broadband.

With its Members, the EBU has formed the most innovative centre of research and understanding on spectrum, and represents its Members at various international bodies responsible for spectrum allocation, including the European Union, the ITU and at the national regulatory level.

Find out more at http://EBU.ch/spectrum.

EBU position and news on spectrum 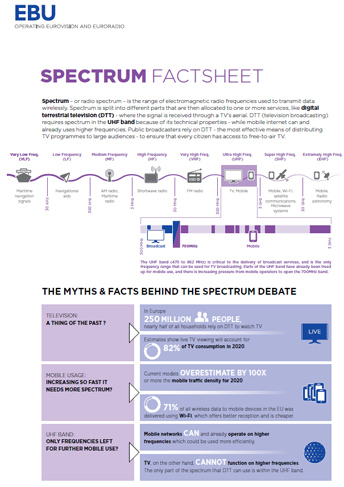