Partnership Programme: EBU Director General Ingrid Deltenre sent a letter to the Government and to the Assembly of Kosovo urging them to find a solution for the funding of public service media (PSM) in Kosovo.

The Government and the Assembly of Kosovo should secure adequate funding for RTK in 2016 and beyond, otherwise the existence of PSM in Kosovo is in jeopardy. Without appropriate level of funding RTK cannot fulfil its public service remit, which is vital for the democracy in Kosovo.

“Longer term funding, stable governance and sustainability of independent public service broadcasting are principles underlying the European standards set by the Council of Europe. These principles are upheld by the European Union since its Amsterdam Protocol of 1997, and Kosovo is to follow these principles in the integration process to the EU,” the letter states.

Kosovo recently signed a Stabilization and Association Agreement with the EU, which also emphasizes the importance of assistance to public media, reinforcing their independence and professionalism and RTK is expected to play an important role in supporting and encouraging social cohesion and stability in the society.

The EBU hopes that Kosovo will undertake urgent measures to enable the appropriate work of public media.

Although RTK is not a full Member of the EBU (because Kosovo is not yet an ITU member state), the EBU has a particular interest in RTK, having been largely instrumental in its creation. 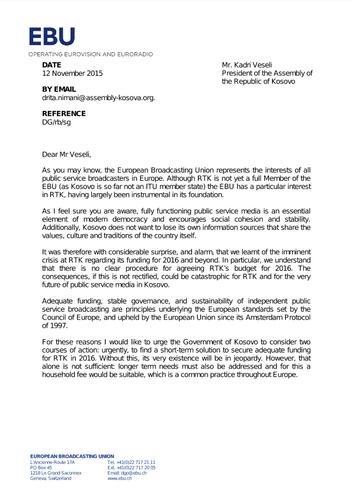 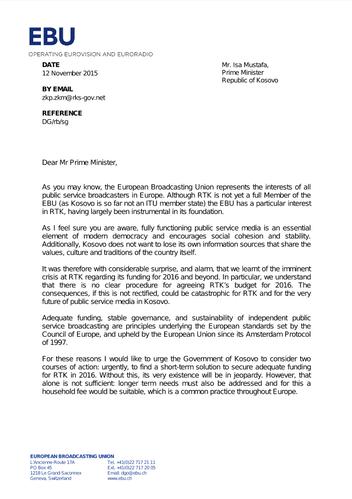