The EBU is extremely concerned by the vote in the Romanian Parliament yesterday to abolish the licence fee for public service media (PSM).

The move to put funding for TVR and Radio Romania entirely in the hands of the Government risks destroying the very foundations of an independent PSM.

In a letter to the Romanian President Klaus Werner Iohannis, EBU Director General Ingrid Deltenre said the move: “will remove all semblance of an effective PSM that can contribute effectively to a cohesive and democratic society. In this way, political interference in TVR affairs can be expected to reach a level almost unprecedented across the entire EBU membership.”

PSM is already in a fragile state in Romania with TVR in particular suffering from a highly politicised governance structure where the President is appointed by Parliament and routinely dismissed each year.

The licence fee provides two thirds of all PSM funding across the EBU area and is proven to be the most reliable method of funding, creating a direct link with the national audience and keeping broadcasts free from political interference.

Moreover, the letter continues: “Such an irremediable step with respect to the funding of PSM television and radio would be notifiable to the European Commission as a new EU State aid measure. In our experience, such cases take many years to be resolved before the government may implement the new system. The only positive we could see coming out of such a delay would be the obligation for Romania, among other things, to ensure the independence of its PSM supervisory body, in line with the guidance set out in the EU State aid Broadcasting Communication 2009.” 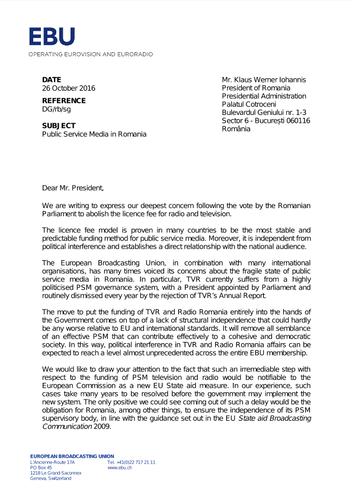