On March 1st the CJEU ruled in a second case between UK broadcasters and TVCatchup, and underscored once again the high level of protection of authors and broadcasters as a key objective of the 2001 InfoSoc Directive, thus contributing to the harmonization of Copyright throughout Europe.

TVCatchup offers live streams of free-to-air UK television broadcasts over the Internet. In national legal proceedings TVCatchup based its position on the applicability of the “reception area” provision in the UK Copyright, Design and Patents Act (CDPA) which allows for the immediate retransmission of broadcasts by cable under specific conditions. The CJEU was asked to examine the relationship between the national provision and Article 9 of the 2001 InfoSoc Directive that guarantees the continued application of legal provisions, inter alia access to cable of broadcasting services.

In its decision the CJEU highlighted the differences between "access to cable" and "retransmission by cable" and concluded that the UK's "reception area" provision is not covered by Article 9 of the InfoSoc Directive.

As a result streaming services that would be retransmitting broadcast channels require the authorization of the rights holders, including the broadcasters. Notwithstanding, the UK government has announced the repeal of section 73 CDPA (which includes the “reception area” exception) and the impact of the decision in the UK will be limited.

However, similar provisions do exist in other EU Member States. In this context, in a recent decision (16 March 2017, C-138/16) the CJEU issued a ruling which seems to contradict the first TVCatchup decision, stating that under the given circumstances of the case, permission for certain broadcasts already included permission for the cable relay of those broadcasts and therefore a new, separate authorization of the same rights holders was not necessary.

It is far from clear whether these different approaches can be reconciled. 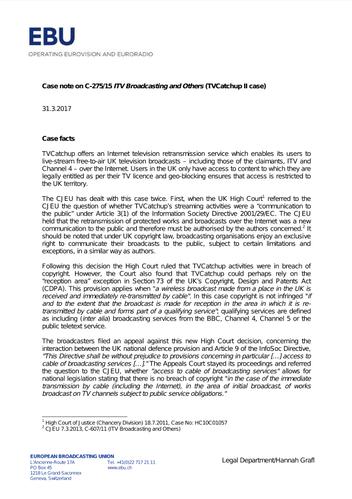