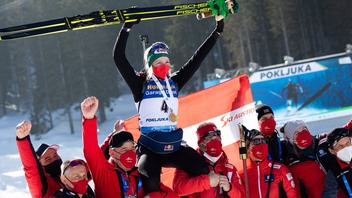 Eurovision Sport is delighted to announce a near 7% increase in hours viewed for the 2021 IBU World Championships Biathlon in Pokljuka, Slovenia (160 million) in nine key European biathlon TV markets, compared with the previous year’s event (150 million).

Thanks to close co-operation between Eurovision Sport, EBU Members and the International Biathlon Union, the championships, which ran from 10 to 21 February, were aired in over 50 European territories by a line-up of EBU Members and other broadcasters including Eurosport, plus a selection of other territories worldwide, including USA.

The figures provide further evidence of the continuing rise of women’s sport, with six of the 11 channels in the nine markets scoring their highest market share with coverage of women’s races at the championships.

Other headline viewing figures include:

“With the championships guaranteed long-term free-to-air TV coverage by EBU Members, thanks to last year’s landmark rights renewal with the IBU, we plan to work together to ensure continuing growth for this cornerstone sport in our winter schedules.”

Olle Dahlin, President of the International Biathlon Union, added: “These fantastic viewing figures are great news for the IBU, for our friends at the Organising Committee Pokljuka 2021 and for the entire biathlon community, and they reflect the growing global demand we have seen for biathlon in recent years.

“We have worked in close cooperation with our broadcasters to ensure that, through free-to-air broadcast, as many people around the world as possible can enjoy our biathlon events this season. These record-breaking viewing figures demonstrate that our collective hard work was worth it and that biathlon - and sport in general - can play an important role in helping to bring society together and inspire during these difficult times.”

Last year, Eurovision Sport and the IBU extended their long-running exclusive media rights partnership. The agreement starts next year and runs until 2026, with an option for the IBU and EBU to prolong for another four years.

Under the new long-term partnership, the IBU and Eurovision Sport will further develop digital and fan engagement solutions for all IBU events, to increase the sport’s visibility worldwide.