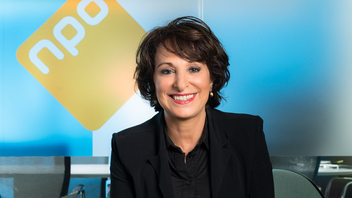 You were the first woman to be appointed Chair of the Board at NPO. Can you tell us about the journey that brought you there?

I worked in journalism and communications, and my career accelerated when I became the Executive Director of IDTV, which is one of the biggest production companies in the Netherlands and the UK.

In parallel, I was committed to social activities, especially for women. I became a member of Women Inc, which is an organization lobbying to provide equal opportunities for everyone, regardless of gender and sexual identity. One of my biggest projects involved inviting children of great leaders of the world, such as Gandhi and Martin Luther King’s families, to join the foundation and welcome them to the Netherlands as students.

Then I joined NPO and succeeded Henk Hagoort as Chair of the Board of Directors in 2016. I was the first woman on the Board and, at the time, there was only one other Dutch broadcaster chaired by a woman. It was a man’s world but that has started to change, now there are three or four women out there, but when I started times were different.

NPO is a governing body of several independent broadcasters, which makes Dutch public broadcasting unique. You have unified NPO through branding, marketing and communication. Why was this necessary?

It was necessary because we live in a digital world and NPO needed to retain audience attention. The multiple independent Dutch public broadcasters, representing various social and religious movements or targeting specific groups, each have their own brands and their own unique content. Having several small brands in our competitive media landscape without a unifying brand was not serving us well. To survive, we wanted a unifying brand that was distinctive and people could recognize. Today, we have one NPO-brand and one NPO-app, the public platform where our viewers and listeners will find content from all our broadcasters.

NPO has gone through significant budget cuts. What led the Dutch government to want to make cuts of two thirds (from 68 million to 22 million euros)?

NPO’s last significant budget cuts happened in 2012 when I just started. One thing I am proud of is that we have had almost no budget cuts since. The Dutch government manages a special reserve to fund NPO and extra expenses for the regions, broadcasters and other media. At NPO, we thought our funding was secure as the reserve was full. However, when it transpired that it was almost empty, NPO was facing extreme budget cuts from 68 to 22 million euros. We started a powerful lobbying campaign and managed  to recover 40 million euros from the government mitigating the impact to 62 million euros. In parallel we aimed at being as efficient as possible, including in programming.

As a result, we have hardly had any budget cuts in the last ten years. In 2021, we even secured a higher budget from the government, which is quite exceptional. I am very proud that during my period we managed to stabilise NPO’s budget together and to build a more secure relationship with all our stakeholders.

Like many public broadcasters in Europe, NPO is more popular as a consequence of the pandemic. In your 2021 New Year speech you said: “the Dutch will never accept that NPO disappears”. What is NPO’s place in Dutch society today?

NPO has always been highly relevant and I think we became even more relevant at the beginning of the COVID-19 crisis. And NPO has real impact in Dutch society, not only thanks to our news programmes, but with our diverse global portfolio, such as programmes like Tegenlicht (documentaries), Fronberichten (on the hospital floor during the COVID-19-crisis) , Wie is de Mol (adventure-reality with famous Dutch stars), but also the very popular Great Dutch Bake Off, inspired by the BBC’s Great British Bake Off.

NPO reaches 90% of the population in the Netherlands monthly. NPO 1 has become market leader and, since 2017, NPO Radio 2 is also the market leader. Our on-demand platform NPO Start reached almost three million viewers a week in June 2021. We are also on YouTube with unique web series and NOS have started NOS Stories on Instagram that have almost a million followers. These are good figures and by doing this we hope to keep in touch with the young generation and of course persuade them to use our own public platforms more often.

More than eight in ten journalists have experienced some form of aggression in the Netherlands according to a recent study (*). Is this a new threat to quality journalism?

Yes. These are very tough times to be a journalist. Even NOS, which is our news broadcaster, had to remove its branding from their vehicles when covering news in the field. We can never accept intimidation. In this respect the assassination of one of our best crime journalists Peter R. Vries was definitely an all-time low. This deeply tragic event shook us all, not just here in the Netherlands, but everywhere in Europe and in the world.

After a 2-year absence, NPO brought warmth to the hearts of Europeans thanks to a fantastic Eurovision Song Contest. What was the journey to such an impressive worldwide production?

Let's start with Tel Aviv, where everything started in 2019 and we couldn't believe it. We had won! We were elated. Then we started realising and… worrying about how to get the financing. Our government was helpful and we are grateful for their support.

In 2020, we had to take the very difficult decision to postpone by one year. This year, we started putting all our efforts into an event that we were not even sure could happen either. To say the least, it was a very bumpy road.

But all the participating broadcasters were eager for us to make it happen. We all needed a big moment of solidarity after over a year of the pandemic. And the show went so well. We created, together with NOS, Avrotros and the EBU, a very innovative European Song Contest thanks to everyone involved and have set new standards! We are so appreciative of the love and support received during the preparation and after the show.

You leave NPO at the end of 2021 after 10 years at the helm. Do you believe in the future of public broadcasting?

Well, that's 100% yes and it’s more than a belief. I think public broadcasting is important for the future: we add value, we make our democracies function better, we are an independent voice. Of course, you never know what the future holds, but I believe public broadcasting has a long life ahead. You never do this kind of job alone and I am grateful to the people who did not let me do it alone.

(*) according to a study carried out by I&O research for PersVeilig published on 5 June 2021 (https://europeanjournalists.org/blog/2021/06/07/netherlands-8-out-of-10-journalists-have-experienced-violence-or-threats/)