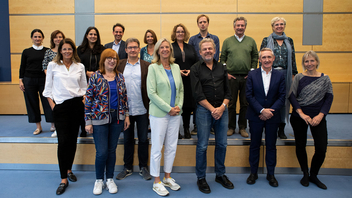 The EBU is establishing new alliances and networks to foster collaboration between European public service broadcasters.

At meetings in Munich and Paris yesterday, broadcasters explored ways to work together on the production of both young adult drama and documentary series.

EBU Deputy Director General and Director of Media Jean Philip De Tender said: “Collaboration between Members has always been at the heart of the EBU’s mission. But cooperating on new co-production models is no longer a nice-to-have but a necessity in today’s global marketplace.

“The economic, creative and strategic benefits of broadcasters working together will allow them to continue to tell the stories that matter most to European audiences, whoever and wherever they are.”

Director General of Bayerischer Rundfunk, Katja Wildermuth, who hosted the meeting of the Documentaries group in Munich, said: “High-class documentaries and documentary films are part of public service broadcasters' DNA throughout Europe. Building a closer network in this field is a great signal and can help to make this common strength shine even more intensively throughout Europe.”

During a kick off meeting in Paris, Members also discussed ways to co-produce young adult dramas in different territories. Manuel Alduy, Director of Cinema and International Development at France Télévisions, said: "Young adult series are usually underfinanced by traditional broadcasters so we feel there is a real need to develop common projects with a higher production value."

The EBU initiated a successful Content Exchange during the pandemic which now involves over 30 Members who have, to date, shared over 2000 hours of content. We have also launched a new Collective Pre-Buy network that allows Members to pre-buy rights to some outstanding high-end drama series.

And, of course, we have a long history of collaboration on co-productions ranging from the hugely popular Eurovision Song Contest to natural history, new music and children’s formats.