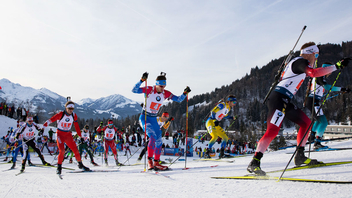 EBU Members are preparing their coverage of the new 2021/22 BMW IBU World Cup biathlon season, which begins in Östersund, Sweden on Saturday, with last season’s extensive list of broadcasters already committed to cover the series and others close to reaching agreement to join the line-up.

Close to 300 athletes from 35 countries will compete in the season opener, as the world’s best biathletes battle for form and fitness ahead of the Beijing 2022 Olympic Winter Games on 4 to 20 February 2022.

High viewing figures for last season’s coverage are expected to be more than matched this season by a line-up of broadcasters that includes:

From this season, biathlon fans will have more opportunities than ever before to engage with the sport, after the International Biathlon Union’s recent launch of its new digital platforms: the first-ever official IBU App for iOS and Android; and a brand new www.biathlonworld.com website.

The Official IBU App, which is available in the Apple and Google Play Store ensures that fans never miss a shot again of their favourite athletes, while they can also follow competitions live through the integration of live data and stats on the IBU website.

Meanwhile, the EBU is partnering with the IBU in its commitment to sustainability, as the IBU works towards becoming a climate-neutral sport by 2030.

The IBU recently joined the UN’s Race to Zero campaign, which commits signatories to reduce their carbon footprint by 50% by 2030. This season, all the IBU organising committees will deliver a detailed CO2 emission measurement that will help them identify where to focus their reduction efforts.

In September, the IBU launched an award for organising committees to promote sustainability best practices at its events that will be first awarded in Spring 2022.

A new venue in Otepää, Estonia joins the World Cup on 10-13 March 2022, providing the penultimate event in the 10-stop series, which concludes in Oslo Holmenkollen, Norway on 17-20 March 2022.

Robert Portman, Eurovision Sport’s Head of Winter Sports, said: “We are really looking forward to the biathlon season again. Last season audiences grew despite the challenging circumstances and we expect strong performance on all platforms for the upcoming season. An Olympic season always brings extra excitement to the World Cup competitions as well”

Olle Dahlin, the IBU President, said: “The day before the start of the biathlon season is always a special occasion and this year with it being an Olympic year it is even more exciting. Over the next four months, we will have the pleasure of watching the world’s best athletes compete in World Cups and at the Olympic Games. It is a privilege we do not take for granted.”

In February 2020, Eurovision Sport and the IBU extended their long-running exclusive media rights partnership. The agreement starts in 2022 and runs until 2026, with an option for the IBU and EBU to prolong for another four years.