New appointments to EBU Executive Board 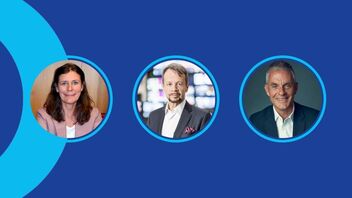 Marinella Soldi (Rai), Gilles Marchand (SRG SSR) and Tim Davie (BBC) have been elected to the EBU Executive Board.

The new board members were elected by the Directors General of fellow broadcasters at the EBU’s 87th General Assembly in Geneva. The Board is responsible for ensuring the implementation of the EBU’s strategy and policies.

Tim Davie became Director General of the BBC in 2020, having worked at the broadcaster for over 15 years. Marinella Soldi was appointed Chair of the Board of Directors at Rai last summer after working for many years as CEO of Discovery Networks Southern Europe. And Gilles Marchand was appointed Director General of SRG SSR five years ago after a long career at the organization.

Tim Davie said: “I am immensely looking forward to joining the EBU Board - we can achieve more together than we can separately. Cooperation is key to our success and, together, we must be ambitious for public service broadcasting. The EBU will continue to be the main place that public service broadcasters can come together to share expertise and support one another in new and evolving ways.”

Gilles Marchand, who previously served on the Executive Board between 2016-2020, said: “In our digital society, characterized by the immediacy of social networks and the rise of individualism of all kinds, public service media has a major responsibility. It is to unite society through quality information, to establish constructive socio-political debate and to invest substantially in culture.”

Marinella Soldi wants to use the new role to focus on three key areas of interest: credibility, innovation and inclusion. She said: “The EBU plays a crucial role in the media innovation sector, in promoting PSM principles and ideals, in championing digital transformation and in strengthening public trust in the news and information we provide.”

The new Board members replace Marcello Foa (former President of Rai), Fran Unsworth, (departing Director of News and Current Affairs at the BBC) and Alexander Wrabetz (who will be standing down as Director General of ORF at the end of the year).

The new Board members have been appointed for the remainder of the 2021-2022 Executive Board mandate.