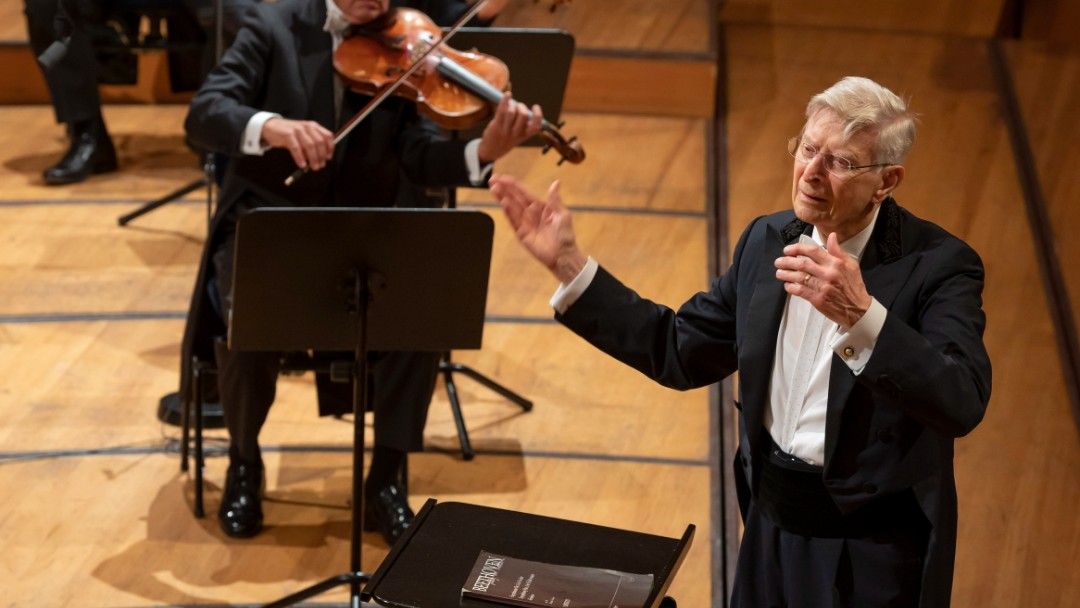 Prominent Swedish conductor Herbert Blomstedt will celebrate his 95th birthday on 11 July 2022. On this occasion, he will perform two special concerts with the Leipzig Gewandhaus Orchestra, following on from his performances with the NDR Elbphilharmonie Orchestra in mid-June. Thanks to our colleagues from NDR, we were able to ask him three questions.

Q: If you were to highlight one important moment of your career, which one comes to mind first?

A: Well, the most important was perhaps my debut in Stockholm with the Stockholm Philharmonic. I was 27 years old, quite old by today’s standards. Many outstanding conductors these days start their careers as teenagers. I’m more of a slow developer. But the second moment, which was very important, was my meeting with the Dresden Staatskapelle. I was invited as a guest conductor in 1969. That was a fantastic experience for me and shaped my musical world in a new way. It was the first orchestra of highest quality that I’d played with – I’d played with good orchestras in Scandinavia; I was music director in Stockholm, Oslo and Copenhagen; but Dresden Staatskapelle was absolutely world class. And their musical ethics, their working policy and their seriousness was modelled for me.

There is really no difference; it's a symphony orchestra. In Copenhagen, for instance, which was the greatest radio orchestra I conducted in Scandinavia, the Copenhagen Radio Symphony was THE Symphony Orchestra of Copenhagen. There was no philharmonic orchestra. It was the radio orchestra. Then there was a big opera and a wonderful baroque orchestra, and later was created the special philharmonic for Copenhagen. But in 1926, when the orchestra was formed, it was a radio orchestra. That was a very happy situation because not only the music director of the radio station but also the president of the whole radio organization was a musician. He was a world-renowned opera singer. And he saw to it that this small orchestra that started in 1926 developed under the very best conditions. For instance, he got money from the beer companies, now Carlsberg and Tuborg. They got big sums of money to buy instruments for this orchestra. And what did they buy? They bought Stradivarius, Guarnerius, all these wonderful Italian-master string instruments. He bought with money from the beer companies. And they are played in the orchestra today. When you get to conduct the orchestra, during the intermission, when they put their instruments on the table while they go and have a snack, you can see that it's a marbled look, what they have. Here’s a Storioni, here’s a Lupo, here’s a Vuillaume, just the perfect instruments. I don't know any orchestra in the whole world that has such good string instruments as the Danish Radio Symphony Orchestra.

The radio orchestras have a special repertoire. Since they are not dependent on public – because the radio public [audience] sits at their receiver and listens – they are not so dependent on ticket sales and don’t play only Tchaikovsky, Beethoven, Brahms and Mahler. They can play new music that doesn’t interest a huge number of people but is important for a country that has a budding music scene. But also these radio orchestras in Germany they have of course discovered that in order to attain the highest artistic level, they also have to play the standard symphonic repertoire.

On 16 July 2022, you will be conducting the Gewandhaus Orchestra for a major concert to mark your 95th birthday. What programme will you perform?

In Rosental there’s a big park within the bounds of Leipzig, a wonderful and very big area. They started their programmes there when I was music director, once. There you can have twenty, thirty thousand people in the audience. It’s huge! Of course they sit on the grass with their families or perhaps a little meal, enjoying themselves and you hear it through loudspeakers. But you also see them on big screens. So these two concerts that we have in July are the first ones after the Covid situation is more or less over – we know it's not completely over but we have again a big audience and we expect at least twenty thousand people for each concert.

The first concert is a popular programme with Beethoven’s 3rd Piano Concerto and his Pastoral Symphony, you know, the symphony where the birds are singing and there's a storm and we hope there will be no rain but in the symphony there’s some rain… Wonderful Beethoven was a lover of nature. In the second programme, we also play the Pastoral Symphony at the beginning but then we have two different works: we play the Variations on a Rococo Theme, for cello and orchestra, by Tchaikovsky, and finish with the William Tell Overture by Rossini.

Amendement as of 30 June 2022: For health reasons, Herbert Blomstedt will not be conducting these concerts anymore.
This interview was made thanks to Stephan Sturm, Journalist at NDR, and Julia Wellershaus, International Relations at NDR.

Three concerts are available to all EBU radio organizations in honour of this important anniversary: the two memorable all Beethoven programmes performed with Martha Argerich from the 2020 Lucerne Festival (ER/2020/B4/09 and ER/2020/B4/19), offered by SRF, and the concert Herbert Blomstedt conducted on 17 June 2022 with the NDR Elbphilharmonie Orchestra (SM/2022/05/26/01), offered by NDR. Many other concerts are still available for broadcast this Summer and later in the Autumn.