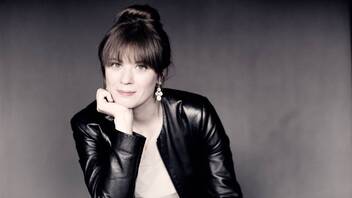 This summer, Ukrainian virtuoso pianist Anna Fedorova made a noteworthy debut at the Verbier Festival and is currently performing with the Ukraine Freedom Orchestra under the baton of Keri-Lynn Wilson, as part of a major tour of the European continent, New York and Washington D.C. We asked her three questions.

Q: This summer you’re touring all over Europe and the US with the Ukrainian Freedom Orchestra. What does this ensemble/project represent for you?

A: It’s very special for me to be performing with the Ukrainian Freedom Orchestra. I think that this is a fantastic project and a great initiative that will generate support, awareness… support for musicians, and support for Ukraine in general. It will be very special to be sharing a stage with all the Ukrainian musicians who will be playing in the orchestra, many of whom have been in Ukraine this whole time. They’re all part of top Ukrainian orchestras, in Odesa, Kyiv, Lviv, Kharkiv. Many of them I actually know. We studied together, they were my classmates or were one or two years above me, or we performed together when we were students. And now we’ll meet again and perform together on stage on this fantastic tour, which was initiated by the Metropolitan Opera and the Polish National Theatre, and organized by Askonas Holt. Our tour will take in the BBC Proms, the Lincoln Center in New York, plus all the top festivals, many fantastic concert halls. It will also be an opportunity to raise funds for Ukrainian musicians, with all monies going to the Ministry of Culture in Ukraine. It means a lot for me to be part of this project.

On this tour, you’re performing Chopin’s Piano Concerto No. 2. How do you relate to this piece? What’s your relationship to it?

Chopin’s Piano Concerto No. 2 is quite a symbolic piece to play. First of all, because Chopin’s story is very similar to the story of many Ukrainians right now. He also had to flee his beloved homeland, Poland, because of the invasion of Russia. He was forced to flee to France, and this is where he spent the rest of his life. The whole time he was sorely missing Poland. You can feel it in his music and every note which he wrote, the nostalgia, the sadness, the profound melancholy, the longing to be back in Poland again. That’s what many of us feel now as well. Also, for me, the Piano Concerto No. 2 was very important during the first month of the war, because it was the music which I started playing first, after the war started. For the first ten days I actually didn't touch the piano out of despair. The feelings of terror and shock were too strong. And then I started organizing benefit concerts together with many other wonderful musicians and people in the Netherlands. In the first benefit concerts, the piece I played was actually the second movement from the Piano Concerto No. 2 by Chopin. I remember this feeling of playing the first note and at that moment I felt myself again. I felt that it was bringing me back to life, to sanity, to peace, bringing me comfort. Because of this I feel it will be really special to perform this concerto during the tour. Actually this tour is one of the examples of Poland’s amazing support for Ukraine, as the tour is organized by the Metropolitan Opera but also in collaboration with the Polish Opera National Theatre in Warsaw and the Polish Ministry of Culture. During this whole time, Poland’s support for Ukraine, for the Ukrainian people and refugees, has been immense. I feel that playing the Chopin Piano Concerto No. 2 is really symbolic in this context as well.

Since the war began, you’ve been organizing and performing benefit concerts to help Ukrainians. The conflict is still going on and will certainly continue for some time. In this long-lasting effort, what is the main thought which occupies your mind while performing?

Indeed, we’ve played several benefit concerts in the last few months, concerts for Ukraine. Many of them were organized by myself together with other great musicians and great people. Some I was invited to perform in. Of course, at every concert, not only benefit concerts, but basically at every concert where I perform, there’s always a thought for Ukraine. Every concert has a very special atmosphere because everyone in the audience, they’re also thinking about Ukraine. Of course, I always talk about the situation, I perform some evocative pieces and I feel very strong support from and connection with everyone in the hall. They really are breathing and thinking all in unison. It’s quite special and powerful. Which thoughts for Ukraine? They depend on the music that I’m playing. If the music I’m performing is darker, more traumatic, sadder, then the emotions are also more oriented towards terror, sadness, pain. We think of the current situation and all the emotions we’ve been feeling in recent months. These thoughts are carried by the music, making them more intense and powerful than before. Music is also a way to let your heart cry out. These, of course, are thoughts and emotions. But when I play some brighter, more hopeful music, like for instance the second movement of Chopin’s Piano Concerto No. 2, then the thoughts are similarly more connected with hope, light… thoughts of a brighter future, of the moment when we can all return to Ukraine, feel safe and happy there, once we know that the sky over our heads is peaceful, that Ukraine is free, beautiful, prosperous, with the hope that the war will soon be over and we can all go back to our normal lives.