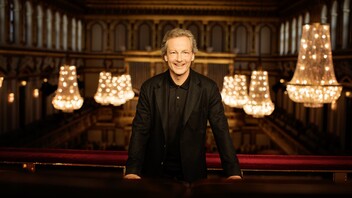 The legendary Vienna Philharmonic New Year’s Concert will take place, as it has been a tradition for many decades, on 1 January 2023, in the Golden Hall of Vienna’s Musikverein. The New Year’s Concert is the most widely broadcast classical music event — on both TV and radio — and this year will be conducted by Austria’s Franz Welser-Möst, who previously led the orchestra for the 2011 and 2013 events. He answered our 3 questions.

Q: The concert is broadcast live in over 90 countries, reaching millions of listeners and viewers around the world. What makes this event so popular?

A:  The New Year’s Concert gives a reason for hope, even in dark times. It expresses a way of life in which joy can be experienced to the full.

2023 will mark your third time conducting the Vienna New Year's Concert. How will you approach this event?

I bought – out of interest and sheer curiosity – all the scores available in print by Joseph Lanner, Johann and Josef Strauss, about five years ago. When I was offered the opportunity to conduct this unique concert for the third time, I had plenty of time to search through these scores because of the pandemic. And I discovered many, many wonderful pieces which had never been played by the Vienna Philharmonic. That’s why we will perform some wonderful but mostly unknown pieces.

You have a very special relationship with the Wiener Philharmoniker, and probably know these musicians better than anyone else. What makes this orchestra different to others?

Because it is a private entity and because of the organizational structure in place at the opera house, which has the widest repertoire in the world. Consequently, it has a different mindset than other orchestras. There is a greater sense of individual responsibility and ownership. Their special sound comes from working with singers at the opera day in day out, and from its two homes: the Vienna State Opera and the unique Musikverein, both of which have fabulous acoustics.

BONUS Q: What are your new year’s resolutions for the coming year?

Music can work at the highest level only if there is give and take. Society would also work much better if we were to keep that in mind.

The Vienna Philharmonic New Year’s Concert is available to all EBU Members, in MUS, under reference SM/2022/10/31/01. In addition to the Vienna Boys’ Choir, the Vienna Girls’ Choir will perform at the event for the first time.