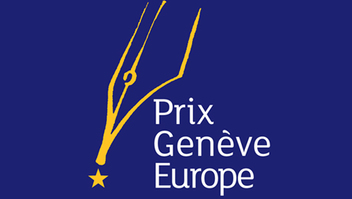 The jury was impressed by the high quality and diversity of the entries.
The most difficult thing in scriptwriting might be to make an internal journey external and to find the right tone of voice and pace to have the audience really identify with the main character.

The "Prix Genève Europe" is the award given each year during the Prix Europa festival for the Best TV Fiction Script written by a new writer and produced or commissioned by a national broadcaster. This EUR 6,000 prize goes to the scriptwriter of a television fiction programme that has been produced over the last year, and the jury members judge the script by screening the film.

Organized by the European Alliance for Television & Culture (EATC) in collaboration with the Prix Europa, the "Prix Genève-Europe" aims to encourage new authors to work in television.

This award was created in 1987 by the European Alliance for Television & Culture (EATC) under the auspices of the European Broadcasting Union (EBU). The alliance is at present made up of EBU Members (ARD, France Télévisions pôle France 2, NPO, SRG-SSR, YLE and ZDF), the EBU and the City & Canton of Geneva.

In addition to the "Prix Genève Europe", every year EATC organizes two scriptwriting workshops in Berlin and Geneva. These workshops are open to promising new scriptwriters who have written a fiction synopsis of any genre so that they can receive help from professional tutors to develop and enhance their stories and scripts. These writers must comply with the EATC writing bursary conditions in particular they must be supported by a European national broadcaster. EATC Members can give their candidates priority but additional bursaries are also available for candidates put forward by other national broadcasters in Europe.