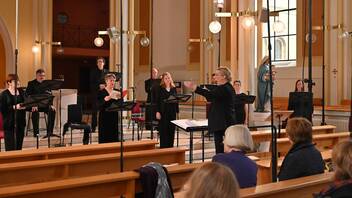 More than just a competition, Let the Peoples Sing (LTPS) has been a jubilant celebration of amateur choral singing since 1961. Held every two years in a different location throughout Europe, the competition will not take place in 2021, due to COVID-19. Nevertheless, this year marks an important anniversary. 60 years after the first edition took place in London, the BBC Singers will perform a dedicated concert in St Peter’s Church to be broadcast by BBC Radio 3 and many EBU radio organizations. We are grateful to BBC Radio 3 and the BBC Singers for sharing this unique concert dedicated to all choirs in Europe and beyond.

60 years of Let the Peoples Sing

The BBC Singers will perform an especially curated concert under the baton of Chief Conductor Sofi Jeannin, alongside organist Francesca Massey. Recorded at St Peter’s Church, Eaton Square, London, all EBU radio organizations are invited to broadcast this concert on 22 November 2021 together with BBC Radio 3 to celebrate Let the Peoples Sing’s 60th anniversary on St Cecilia Day, Patron Saint of Music and Musicians. Find the offer on the Music Exchange Platform (MUS) under the reference SM/2021/10/02/01. A BBC and EBU commission by Bob Chilcott, LTPS’s former juror and BBC Singers Principal Guest Conductor, is included in the programme. His setting of "The Gift to Sing" by James Weldon Johnson, which gives its name to the concert, is a gift to all choirs that are starting to make music again after the events of the last 18 months.

Bob Chilcott said "James Weldon Johnson’s poem, The Gift to Sing, carries a heartfelt and direct message about what it means to sing. I have endeavoured to reflect this with a piece that will not only show the rich sound of the BBC Singers but will also serve as a piece that can be sung by fine amateur choirs such as those you will hear in Let the Peoples Sing.  This 8-part ensemble piece is designed for the lovely acoustic of St Peter’s, Eaton Square."

The history of the LTPS Euroradio Choral Competition can be traced back to 1961 when it was founded by the BBC as an annual contest for British choirs. Since 1966, it has been open to ensembles from throughout Europe, and starting in the late 1970s it was organized by the European Broadcasting Union as an entirely international event. The Competition takes place every two years, each time hosted by a different European broadcaster, and it attracts entries from all over the world. In recent years, in addition to European candidates, there were choruses from Canada, Israel, the Philippines, Malaysia and Singapore. A US ensemble reached the finals for the first time in 2011.

Learn more about the history and its winners.