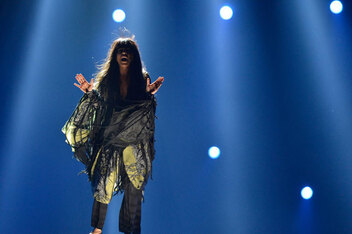 Baku, 29 May 2012 - Loreen, who stormed to victory in Saturday's live final of the 2012 Eurovision Song Contest in Azerbaijan, said she 'tried not to think too much' about her performance in the days leading up to the event.

The 28 year old artist scored 372 points for 'Euphoria,' written and produced by Peter Boström and Thomas G:son before a packed audience at the Crystal Hall in Baku. The production was transmitted over the Eurovision and Euroradio networks to Europe and other countries worldwide via EBU Member, Ictimai TV before a worldwide viewing audience of more than 100 million.

Buranovskiye Babushki came second with 'Party For Everybody', which earned the Russian grandmothers 259 points, while Serbian Željko Joksimovic was third with his track 'Nije Ljubav Stvar', tallying 214 points.

Irish entry Jedward failed to replicate 2011's top ten placing for their song Lipstick,  with this year's 'Waterline' ending up in 19th place with 46 points.

The UK's Engelbert Humperdinck, however, had to settle for only 12 points for his performance of 'Love Will Set You Free', leaving him in second to last place, in front of Norway.
After thrilling fans with an encore performance of Euphoria, the Swedish singer addressed a packed news conference about her preparations for the competition:

"I slept a lot, I ate a lot, and I tried not to think too much about this performance. I am a shy person, to be honest. To the Swedish audience, I would like to say thank you for giving this type of performance a chance."

EBU Executive Supervisor, Jon Ola Sand paid acknowledged the hard work which had taken place behind the scenes. "The EBU would like to thank Ictimai TV. All three shows broadcast this week were produced to the highest standards. Our congratulations to the winners and the finalists who can be proud of the role they played in delivering a fantastic evening of entertainment."
----------

About the European Broadcasting Union (EBU)
The EBU serves 85 national media organizations in 56 countries in and around Europe. It represents its Members and promotes the values and distinctiveness of public service media in Europe and around the world. The Eurovision and Euroradio networks deliver news, sports, events and music to EBU Members and other media organizations. Services to Members range from legal advice, technical standardization and development, to coproduction and exchange of quality European content. For more information about the EBU: www.ebu.ch and www.eurovision.net/

Loreen, who stormed to victory in Saturday's live final of the 2012 Eurovision Song Contest in Azerbaijan, said she 'tried not to think too much' about her performance in the days leading up to the event.