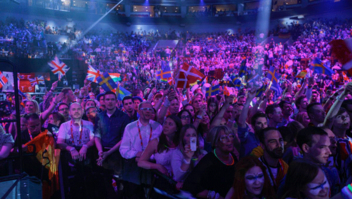 The audience cheers during the final of the 2013 Eurovision Song Contest in Malmo. (EBU/Dennis Stachel)

EBU has launched a pan-European survey to deliver an even greater Eurovision Song Contest (ESC). Around 5,000 people, aged 16 and older, will be randomly selected to participate in the study.

In addition, researchers will also canvas the views of people known to have a special relationship with the contest, including heads of delegations, fans, bloggers and journalists.

Executive Supervisor Jon Ola Sand says the idea is to build a clearer understanding of how the ESC is perceived in different countries in Europe.

"We would like to know more about our viewers and non-viewers. Who are they? What are their media habits? What do they think about the Eurovision Song Contest?" he said. "With this kind of intelligence, we can deliver an even greater audience experience by keeping the contest fresh and relevant."

Mr Sand said the survey will gather information on subjects ranging from brand awareness to viewing times, the contest image, voting procedures, commentators, the notion of 'fairness', hosts and the kind of entertainment provided during intervals.

The survey results are expected to be finalised by February, enabling organisers to tweak aspects of the contest in time for the 2014 ESC in Copenhagen, Denmark.