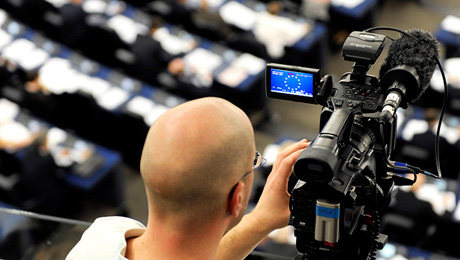 Eurovision, operated by the European Broadcasting Union (EBU), is set to make broadcasting history by creating the first ever live televised debate between would-be presidents of the European Commission*, on 15 May.

The Eurovision Debate will bring presidential nominees face to face in an unprecedented showdown to be aired on television and online.

Eurovision is applying criteria established through discussions with the political parties to decide which candidates will participate. Between five and seven presidential hopefuls are expected.

The Eurovision Debate will take place inside the European Parliament plenary chamber, in Brussels, and will be followed by a Q&A with the candidates.

The programme, which will be filmed before a live audience, will be moderated and presented in English by veteran Italian journalist and TV presenter, Monica Maggioni. Social media will play an important role as Eurovision collects the comments, questions and opinions of European citizens via the hashtag #TellEUROPE.

“A principal role of public service broadcasting is to bring audiences relevant, impartial current affairs programming, and it is the EBU’s job to help our Members to do this.”

She added: “In this year of European political change, viewers need more than ever to know about the people at the top and what they stand for. Public service media play a pivotal role in creating an informed public, and the Eurovision Debate is an innovative way of achieving that on a pan-European scale.”

Eurovision is the programme producer and director, and all editorial decisions are taken by a board of experienced news journalists from EBU Member organizations.

*A new European Commission will take office in November 2014 for a five-year term. This will be the first time that candidates for the Commission Presidency will have been nominated by political groups within the European Parliament.