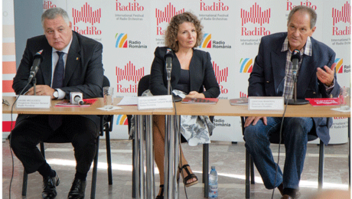 The EBU is proud to be partners of the International Radio Orchestra Festival, “RadiRo”, organized by EBU Member Radio Romania, a long time supporter of classical music.

In 2014, the second edition of RadiRo will take place at Bucharest's Radio Hall (20 to 27 September) and will bring onto the stage - as well as live on public radio stations - five famous orchestras and world-class conductors.

Some of the world’s leading figures on the classical music scene will also be present: the pianist Jonathan Biss, soprano Katarina Jovanovic, pianist Jan Simon and the violinists Nikolaj Znaider and Vadim Gluzman, alongside great Romanian artists like the mezzo-soprano Ruxandra Donose, pianist Horia Mihail and violinist Alexandru Tomescu. The honorary director of this year’s RadiRo Festival, the Romanian conductor Cristian Mandeal, will bring added prestige.

All concerts are available to EBU Member broadcasters.

"In 2012, at the first RadiRo Festival, our aim was to bring to Bucharest music as performed by public radio symphony orchestras. Today, for its second edition, we have succeeded in bringing classical music to Bucharest – and I tell you this with pride – in order to offer it to concert audiences and then give it back to the whole world. We are doing this by broadcasting the concerts on the Radio Romania Music and Cultural Channels, but also via the platforms of the European Broadcasting Union, representing a potential audience of millions of listeners."