The EBU welcomes the provisional agreement between EU legislators on the EU Trade Secrets Directive. The decision spells good news for freedom of the media thanks to the approval of a clear exemption for journalism in the Directive.

Media organizations initially feared that serious collateral damage for freedom of the press and media would emerge from a Directive aiming to harmonize European rules against industrial espionage and the illegal acquisition of business know-how. Investigative journalism and the people’s right to be informed could have been seriously undermined by sanctions for the disclosure, and even the acquisition of sensitive secret information of public interest.

However the provisional agreement on the Trade Secrets Directive adopted on 15 December between the Luxembourg Presidency of the EU and the European Parliament includes the necessary safeguards to avoid restricting media freedom.

EBU European Affairs Manager Guenaëlle Collet said: “The agreement sets a clear exception to ensure that corporate interests cannot hamper the exercise of journalistic activities. This is a relief because previous drafts dangerously put in question the legitimacy of exercising the right to freedom of expression and information, including media freedom. This would have opened the door to arbitrary sanctions against whistleblowers, journalists and the media, leaving a sword of Damocles hanging over the head of editorial teams.”

“The exception for journalism is all the more important because the Directive gives a rather broad definition of ‘trade secret’ and includes far-reaching sanctions.”

“We have worked closely with European representatives of journalists and media over the past months as part of an intense campaign to bring this issue to the attention of EU decision makers."

On 15 December, the Luxembourg Presidency of the EU also announced an agreement on the much-awaited General Data Protection Regulation. The EBU can salute the fact that the Regulation requires Member States to strike a fair balance between the fundamental rights of privacy and freedom of expression and information. In effect, the processing of personal data for journalistic purposes is not affected.

The Trade Secrets Directive and the General Data Protection Regulation are now expected to be formally adopted early next year by the European Parliament. 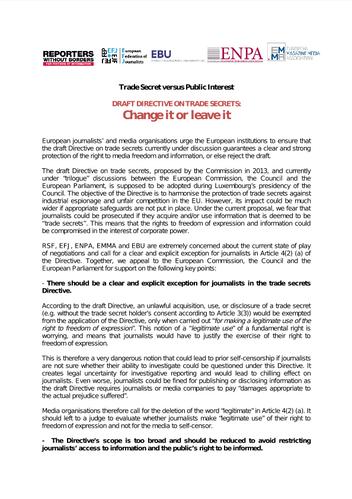 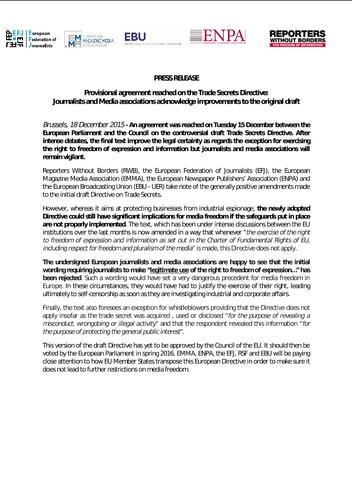