The 75th General Assembly of the EBU has adopted a Declaration on the importance of sports' programmes for Public Service Media's (PSM) audiences.

The Declaration was adopted on 4 December in Geneva to draw attention to the worrying trend whereby major sports' events are increasingly accessible behind pay-walls only, cutting off a major part of the potential audience. The EBU believes that sporting events of major importance for society should be available to all on a free-to-air basis to underpin social cohesion.

The EBU points at the upcoming review at EU level of the Audiovisual Media Services Directive as an opportunity to strengthen existing provisions which allow EU Member States to draw up lists of major events which must available on free-to-air television.

The full text of the EBU Declaration is available here below or for download.

Declaration of the 75th General Assembly of the EBU: Sports’ broadcasting: a vital element of social cohesion in Europe and public service media’s contribution to society

The 75th General Assembly of the EBU stresses that offering free-to-air sports programmes for all is an intrinsic part of Public Service Media’s role and a pillar of its relationship with audiences.

The rise of sports as a central part of popular culture has gone hand-in-hand with the development of sports’ broadcasting. Free-to-air sports reception at home has given people all over Europe the possibility to enjoy and discover all types of sports, ranging from those with mass appeal to those followed by specialist audiences.

Sport brings people together and transcends society. It shapes our culture and identity, creates common experiences and shared heritage, gives us heroes and role models, and inspires us to lead better, healthier lives.

However Public Service Media’s capacity to offer free-to-air sports progammes for all is increasingly being challenged in today’s ever-more competitive global media environment. With more and more sports’ programmes and live coverage falling behind pay-walls operated by vertically-integrated and transnational media giants, the general public risks losing out in all European countries. This negative trend needs to be halted with regulatory support.

The average monthly cost of public service media per citizen in the EU in 2014 was EUR 3.14. The monthly average revenue per user (ARPU) of pay-TV in the same year was EUR 19.9. Sport is often a premium asset so the average ARPU for sport premium packages is likely to be much higher. Accessing sport on public service media offers far better value for our viewers.

With the European Union’s ambitious Digital Single Market Strategy taking shape, we consider that the foreseen review of the Audiovisual Media Services Directive is an opportunity to reverse this tendency and bring sport back to the public.

We urge the EU Institutions to strengthen the provisions in the Directive on “events of major importance to society” and vividly encourage all Member States of the EU to draw up precise lists of sports events which should be available to all at no extra cost. 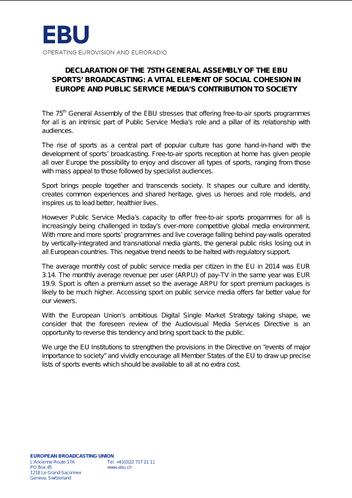