EBU calls for Romanian PM to save TVR

She continues: “We at the European Broadcasting Union have done all we can to assist TVR by rescheduling debts, but we are still owed EUR 15 million. We have sent letters to your predecessors and to the Romanian authorities, but the situation has unfortunately only become worse.”

“TVR’s crisis should not be ignored any longer and urgent decisions need to be taken about the future of this institution.”

The letter also expresses the need for “an all-encompassing reform and for new legislation that addresses all key questions regarding public service broadcasting’s sustainable funding, governance and remit, based on the proposal developed by TVR.”

It concludes: “We are encouraged by the fact that the parliament and the government have held a joint meeting to discuss TVR‘s situation and that your government is willing to support the parliament’s decisions and consider a guarantee for the bank loans that TVR needs to take out to enable it to continue its work.” 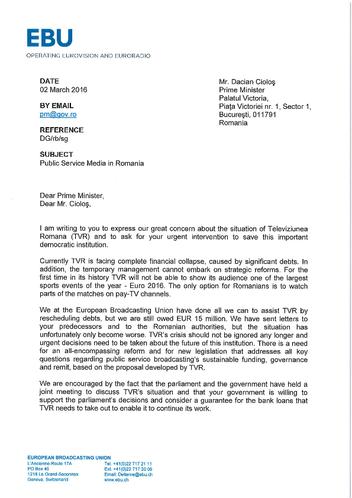