EBU calls for Kosovo authorities to decide on funding of RTK

The EBU’s Director General Ingrid Deltenre has written to the President of the Assembly of the Republic of Kosovo Kadri Veseli in support of an urgent amendment to the law on public service broadcasting.

During meetings with the President and the Parliamentary Committee on Media earlier this week, the EBU stressed the urgent need for Kosovo to find an adequate, stable and predictable source of funding for public service broadcasting.

State funding for Radio Television of Kosovo (RTK) runs out in June which leaves their funding undefined after this date.

In the letter Deltenre writes: “Stable funding is an indispensable prerequisite for RTK to produce trusted programmes for everyone and for RTK’s essential contribution to social cohesion.

“Additionally, in the context of the Stabilisation and Association Agreement signed with the EU Commission, it is worth noting that sustainable funding of public service media is a requirement under the EU Amsterdam Protocol.”

According to RTK’s financial assessment, the current budget of EUR 11 million – which includes EUR 2 million from advertising – is insufficient in the context of rising costs and the need to renew the production and distribution infrastructure. The annual budgets of EBU members of similar sizes such as Albania, Bosnia & Herzegovina and the Former Yugoslav Republic of Macedonia are in the range of EUR 17-22 million.

The letter was also sent to the Prime Minister of the Republic of Kosovo Isa Mustafa. 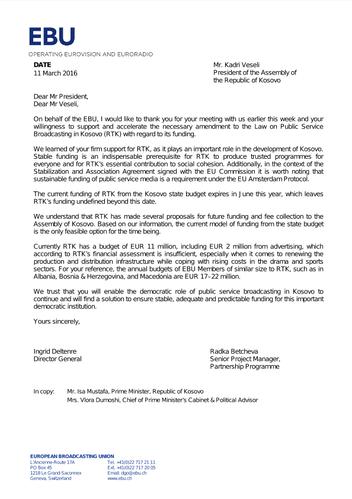